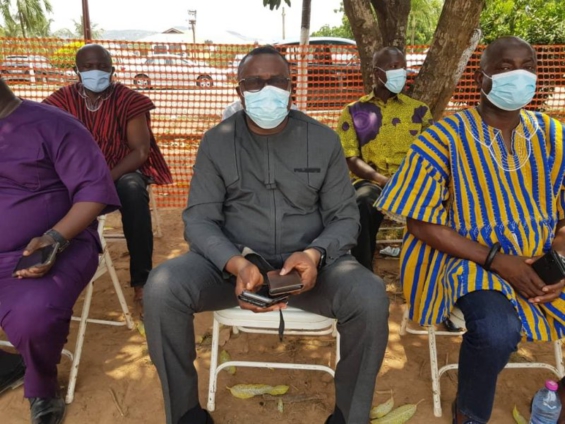 A statement issued by Mr Ralphael Apetorgbor, Deputy Communications Officer, NDC Anyaa Sowutuom Constituency, copied to the Ghana News Agency, said the NDC leadership commiserated with the family of the late Alhaji Agbeve during the Janazah prayer at Agbogba, Accra.

It noted that Alhaji Agbeve, who died on Thursday, August 5, was laid to rest on Friday, August 6 at the Ahmadiyya Muslim cemetery in Kasoa, Central Region.

The statement said Alhaji Agbeve’s funeral was attended by NDC supporters and sympathisers, as well as politicians from across the political divide.

It recalled that the late Alhaji Agbeve was the NDC Chairman for Weija Constituency before it was demarcated into three new constituencies-Anyaa Sowutuom, Bortinor Ngleshie Amanfrom, and Weija Gbawe in 2012.

The statement noted that he was the first Chairman for Anyaa Sowutuom and also served on several committees of the Party.

It said Alhaji Agbeve was the Founder of Agbeve Herbal Hospital in Accra.

Mr Ofosu-Ampofo said: “On behalf of the former President John Mahama and the NDC, I commiserate with the wife, the children, and the entire Agbeve family on the loss of Alhaji Mohammed Agbeve, who had contributed greatly to the NDC and to the health of many Ghanaians.”

“My condolences also go to the management and staff of the Agbeve Herbal Hospital for the loss of their indefatigable founder, whose management skills had helped to propel the company.

“He (Alhaji Agbeve) is somebody we will all continue to miss because of the relationship he kept with all.”

The statement noted that early on at the late Alhaji Agbeve’s Sowutuom residence, Alhaji Mustapha Abubakar, a former Deputy Chief Executive Officer of Microfinance and Small Loans Centre (MASLOC) extolled the values of the renowned herbal practitioner, describing him as a man of destiny who lived a fulfilled life.

He said late Alhaji Agbeve lived a life of love and service, which he bequeathed to his family, the NDC, and community, noting that all who had contact with him would continue to cherish memories of him.

Alhaji Abubakar also prayed that the Almighty Allah grant the family fortitude to bear the irreparable loss and Aljahnah Fridhous to the departed soul.

Responding on behalf of the family, late Alhaji Agbeve’s son, Dr Abdul-Wahab Agbeve, appreciated the leadership of the party for being supportive at all times.

The statement said the Party donated an undisclosed amount of money, cartons of bottled water, and soft drinks to the bereaved family.