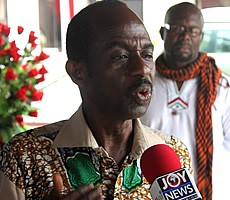 National Execu­tive of the National Democratic Con­gress is urging President John Mahama to select a running mate for the 2016 election before the close of 2015.

According to the party, an early announcement of a running mate and a manifesto would help the NDC put its campaign into full motion at the beginning of 2016.

Their call comes on the back of the endorsement of President Mahama as the party's presidential candi­date for the 2016 election by members of the NDC over the weekend.

About 95% of those who voted in the primaries endorsed President Mahama as the presidential candidate for 2016.

Speaking to the media, General Secretary of the NDC, Johnson Asiedu Nketia said appointing a run­ning mate before end of the year will enable the party prepare adequately for elections in 2016.

"In the days ahead, we have the following activities to conduct, hopefully before the end of the year: Number one, we will move as expe­ditiously as possible to con­duct the last batch of six parliamentary primaries; and two, the selection of our running mate and the out-dooring of all our candidates.

"The party will strongly advise His Excellency the President to trigger the process of making our run­ning mate known so that we can prepare ourselves for the elections in 2016.

"Again, the final one would have to do with the launch of our 2016 mani­festo," he said.

He explained that the NDC's constitution gives the presidential candidate the prerogative to select his running mate in consulta­tion with the party.

Who to partner President John Mahama for next year's election has been a subject of interest for many political watchers as specu­lations have been rife that the President was not likely to retain his vice, Paa Kwesi Amissah-Arthur.

It is being rumoured that President Mahama was sure to pick Minister of Foreign Affairs, Hanna Tetteh, as his next running mate.

But that speculation ap­pears to have been discred­ited after the President, ahead of the NDC presiden­tial primaries, delegated his vice, Amissah-Arthur to pick nomination forms on his behalf.

Many concluded that President Mahama by that act had endorsed and evi­dently indicated his trust in Paa Kwesi Amissah-Arthur.