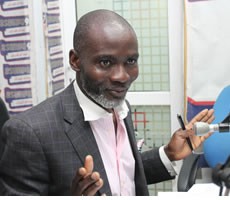 The Executive Director of the Danquah Institute (DI), Gabby Asare Otchere-Darko has bemoaned what he says is a deliberate attempt by the ruling party’s to discredit the opposition New Patriotic Party’s (NPP) proposal to provide housing for female head porters popular called Kayayei if voted to power.

Flagbearer of the NPP, Nana Akufo-Addo promised to build affordable hostels for these head porters mostly from Northern Ghana in search for greener pastures in Accra.

But President John Mahama while addressing a rally in Tamale rubbished proposal by the NPP presidential candidate adding that it is an insult to the sensibilities of the Kayayei. He said the freebies by the NPP leader exposes the party’s desperation for power.

But speaking on Asempa FM’s Ekosii Sen programme Thursday, Gabby Asare Otchere-Darko said it was obvious the ruling party is not sensitive to the plight of the people whose interests had been marginalized.

According to him, the NDC as a center-left party, whose proposals should focus on helping the poor through direct government assistance has rather exacerbated the plight of the ordinary Ghanaian on the street.

Asare Otchere-Darko added the President’s comment was rather insulting to the plight of the Kayayei who sleep on the streets.

“Unless the President is playing northern politics, I don’t see how a leader of a social democratic party will go against this” he said.

The DI boss stated that the argument about the housing policy should be on how the NPP intend to implement it.

He said the NPP as a center-right party which is more associated with entrepreneurship and market growth should be applauded for successfully implementing people centered policies.

The NPP man said housing the Kayayei will be linked with vocational training to empower them in their future endeavours.

Gabby Otchere Darko reaffirmed the NPP’s commitment to serve the interest of the vulnerable and build a society of opportunities and prosperity for everyone.