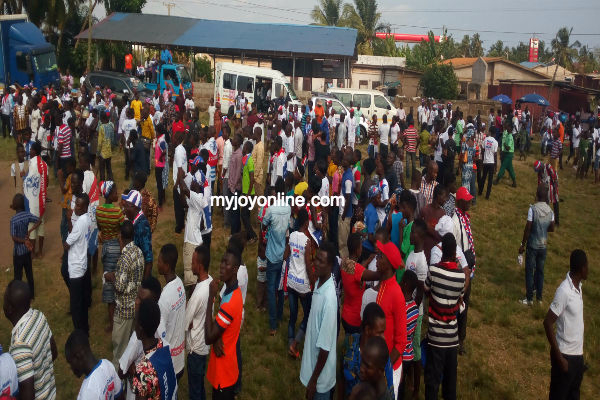 There is tension mounting in the Ketu South Constituency in the Volta Region following the appearance of a banner purported to be from supporters of the National Democratic Congress (NDC) popped up a New Patriotic Party (NPP) regional rally ground.

The banner with the inscription "Ghanaian residents in Togo are not Togolese, they have rights just like those in the UK" has been fixed at Denu junction where the candidate of the NPP flagbearer, Nana Addo Dankwa Akufo-Addo is billed to address the party's supporters later.

Joy News has gathered that there were earlier banners hanging at vantage points along the major streets of Aflao welcoming Nana Akufo-Addo to Togo.

One of the earlier banners which had the inscription "Ketu South Welcomes Nana Akufo Addo, Bawumia and the NPP to the republic of Togo. We are Ghanaians, not Togolese" was removed by some NPP supporters in the early hours of Sunday.

The removal of the banners, however, caused some confusion in the constituency as NDC supporters and NPP supporters clashed at the site of these banners. It took the intervention of the police to help restore order.

Scores of party supporters and functionaries are gathering at the Aflao-Avoeme for a rally awaiting the arrival of Nana Akuffo Addo, in the backyard of the 'world bank of the NDC'.