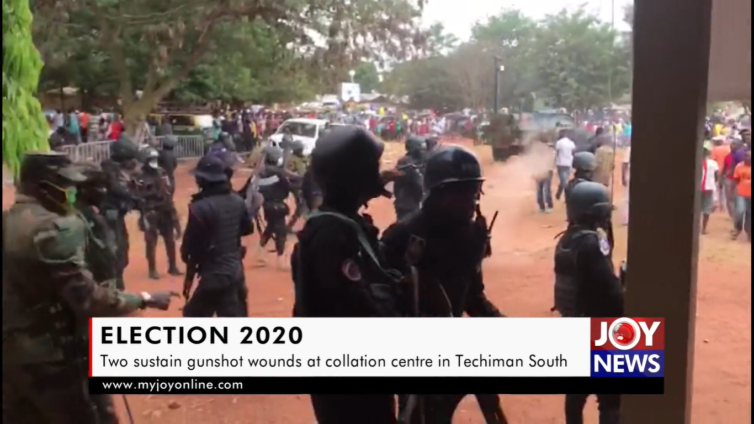 The 2020 flagbearer of the National Democratic Congress (NDC), John Mahama, has assured the people of Techiman that the next administration will ensure a speedy investigation into election violence that occurred there last year.

The former President said they will ensure the culprits will be punished.

According to Mr Mahama, if the Akufo-Addo and Bawumia government reneges on its duty of punishing those responsible for the shooting and killing of the three persons in Techiman during the elections, the NDC will investigate and punish all such persons.

The 2020 elections, for the first time, saw the killing of eight defenceless citizens, among whom were children, with Techiman South recording a number of casualties.

But nine months after the incident and with no one held responsible for the crimes, Mr Mahama has insisted that it is important for justice to be done in order to forestall such occurrences from being repeated in future.

“We have said that justice must not only be done but be seen to be done. It is important that those who committed those crimes are punished lest they will repeat the same action tomorrow. This is the nature of impunity.”

“Because Techiman occured and nothing happened, that’s what encouraged the Ejura [killings]. And when it continues and no one is punished then there are disturbances…”

The former Commander-in-Chief of the Ghana Armed Forces, was answering questions in an interview on Akina Radio in Techiman in the Bono East region, as part of his tour to thank Ghanaians for their votes and support during the 2020 elections.

The former President observed that the rules of engagement governing the security services are being abused under this administration.

“The security has rules of engagement when dealing with civilians and that includes the use of hot water among others. It is only when these fail that you bring in the military.”

“But when you look at what happened at Ejura, when the security forces were coming, it was the soldiers who were leading the charge instead of the police being in front with soldiers at the back.

“So that if the police fail then the soldiers step in, but as soon as they got there, those who immediately jumped into action were soldiers in pickups who started shooting causing mayhem” he said.

Mr. Mahama disclosed that some of the victims were non political actors, including children who had only come to witness the electoral process.

“Some of the victims were not even members of our party. They were inhabitants of Techiman who came to witness what was happening. One was a young child, barely 18 years. So when they shot the gun, three people fell dead. And there were many others who sustained gunshot wounds.”

The former President expressed sadness when he was informed that President Akufo-Addo had not condemned the murders nor visited the victims. He nonetheless pledged that when the NDC comes to power it would ensure that all victims and their families receive justice.