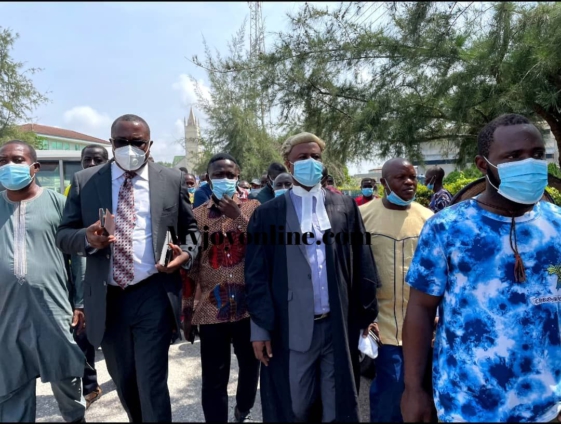 The National Democratic Congress (NDC) says the opposition party will resist all attempts by the governing New Patriotic Party (NPP) to use technicalities to remove the MP for Assin North, Joe Gyaakye Quayson, from office.

A Cape Coast High Court on Tuesday deferred judgment on the matter to July 28, as Joe Gyaakye Quayson had invoked the supervisory jurisdiction of the Supreme court on the matter.

Even though the Supreme Court has set July 27, for its decision, NDC National Chairman, Samuel Ofosu Ampofo, said the people of Assin North should not be denied a representation because the NPP needs to increase its numbers in Parliament.

At a post court interview with the media, Mr Ofosu Ampofo stressed that they have identified the machinations against the MP and the party has been very worried about the direction the case was going.

The NDC, he indicates, has been very uncomfortable with the judge’s earlier decision to pronounce judgment on the 14th of July and their belief was that there were some pieces of evidence that would have been adduced before the court if it had allowed oral submissions to be made before it.

“If he had allowed oral evidence to be adduced during the trial process, we could have justified why we think that our member of Parliament for Assin North was duly and properly elected as well,” he stated.

Mr. Ofosu Ampofo explained to the press, the NDC’s legal team and the vetting committee of the party thoroughly examined documentation of all those who were domiciled outside the country and were seeking to contest elections in the country.

He claimed: “We went through their documentation and we were satisfied. In fact, that committee was chaired by no other person than the current speaker of Parliament, Rt Hon. Alban Bagbin. The venerable personality scrutinized all the processes of our legal team to satisfy the party that Joe Quayson, the MP for Assin North, was very qualified under the electoral laws of Ghana and should contest the elections. And again, the issues were even raised before the electoral commission and the commission also adjudicated on the matter and cleared him even before he filed his nomination.”

He further held the assertion that the back and forth in court was a ploy to reduce the numbers of the NDC in parliament.

He says given the opportunity for the legal team of the Assin North MP to give oral submissions, they could adduce evidence as to when Joe Quayson actually renounced his citizenship, with all the documents that would be attached.

He said: “Our legal team has them and this will go a long way to exonerate him and justify why the party feels and why the EC itself accepted the nomination for him to file and contest.”

He added, “mind you, this is an election petition, the people of Assin North queued from morning to evening to elect an MP of their choice and we will not allow any technicalities whatsoever to be used to deprive us of our MP”

“We know all the machinations that are going on. They are very comfortable with the hanged parliament the country has now and they are trying every possible means, including legal gymnastics, to deprive the NDC of our numbers we have in Parliament.”

Michael Ankomah Nimfah, a resident of Assin North, petitioned a Cape Coast High Court over the qualification of the Assin North MP. According to him, the MP did not qualify to contest the 2020 elections at that time he filed to contest the elections.