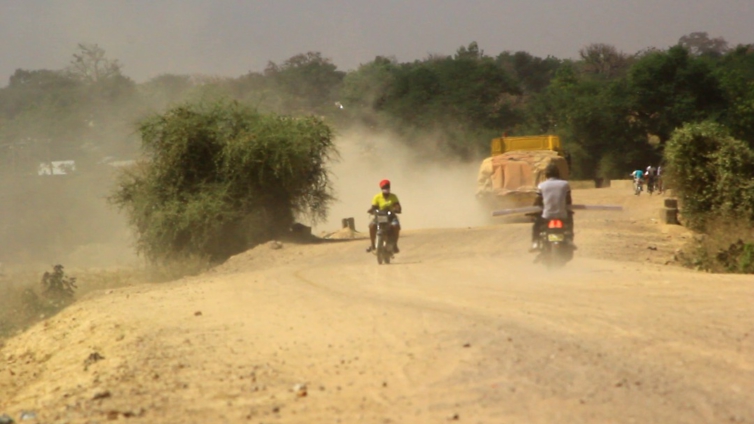 It is one of the international roads linking Ghana to Burkina Faso in the north but left deplorable for many years.

The 95 kilometres could generate more revenue for the Bongo District in the Upper East Region as it does now.

But several appeals by residents to get the road constructed have yielded no positive results. Travelling along the road, the dust, and its cumulative effects on lives leave much to be desired.

School children who ply the dusty road daily are the most affected. Long trucks, heavy with goods, begin their 95-kilometre trek to Ouagadougou in Burkina Faso.

The stretch is one of three major roads linking Ghana to Burkina Faso. The Kulungungu, the Paga and Namoo. Unfortunately, the Namoi has been ignored for years.

Since 1988, the road has generated substantial revenue for the country. Joseph Atanga who was the first revenue collector gives accounts.

“I was the first revenue collector and the road gave Bongo district assembly a lot of revenue,” Joseph says.

According to Joseph, the road had the biggest internally generated fund between 1992 and 1994.

Though the shortest route to the capital of Burkina Faso, Ouagadougou, the road has not received the needed attention.

When Joseph left office, he raised 4500 cedis a week for the district.

“But at the moment, the cars that pass here is more than when I used to work.”

In 2004, Joseph gave up his position as a revenue collection due to a change of government. He came back to the office in 2009 but went off again and never returned.

Mr Atanga says his 16 straight years of working on the road as a revenue collector has shown money generated here is enough to fix the road.

Road infrastructure is the most important of all public assets. Because it provides access to employment, health, social, economic, and education services in the fight against poverty.

It becomes more significant when a road is a link to another country. Paramount Chief of Bongo is also worried the road is still in bad shape.

Naba Salifu Baba Alemyaarum appeals to the government to take a second look at the road.

Good roads facilitate economic development but poor road infrastructure is a constant source of frustration in this part of Ghana.