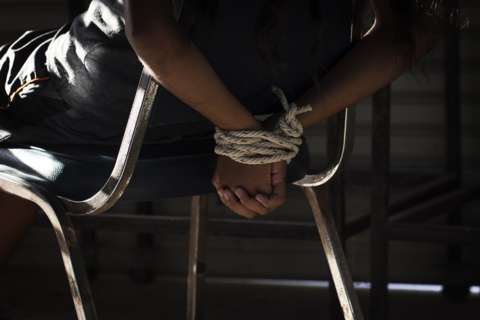 The abductors were demanding a ransom for the 13 captured women

Thirteen young women who were abducted by unknown people in Zambia have been rescued months after they disappeared.

The women, aged between 17 and 28, include a mobile money booth operator who became the face of the abductees after a video in which she appeared being beaten with a metal rod while pleading for mercy went viral about six months ago.

The abductors were demanding a ransom.

Police had launched a manhunt which yielded nothing.

But on Monday, one of the abductees managed to scale a wall of the house where they were being held in the capital, Lusaka’s Chalala residential area.

She then alerted neighbours who broke in to rescue the rest of the women.

Robby Chitambo, who was the first to respond to the distress call, mobilised his friends to break into the house, and narrated graphic details of what he saw.

He said he found a casket, used condoms and sanitary pads in the house before calling police who later arrived at the scene.

“We helped the ladies by taking them out. One of them is pregnant. We found a casket and a shrine inside the house. There were also charms, pads and condoms everywhere,” he narrated.

In a statement, Inspector General of Police Lemmy Kajoba said that all the victims were taken to a medical facility.

He said they had arrested a suspect who was helping police with investigations.

Zambians on social media have welcomed the development.

“What’s the equivalent of a knighthood in Zambia… Whatever it is, safe to say #RobbyChitambo is a perfect fit,” a Twitter user said.

DISCLAIMER: The Views, Comments, Opinions, Contributions and Statements made by Readers and Contributors on this platform do not necessarily represent the views or policy of Multimedia Group Limited.
Tags:
kidnapping
Zambia