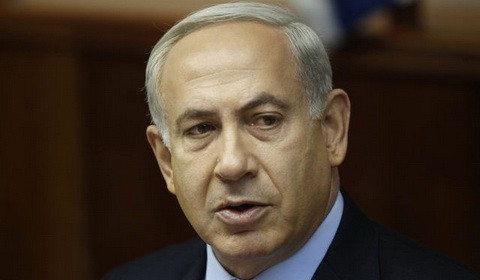 Elsewhere, many welcomed the agreement as an important first step toward curbing Iran's suspect nuclear program.

Israel and Western-allied Gulf countries led by Saudi Arabia have formed an unlikely alliance in their opposition to Sunday's deal, joined together by shared concerns about a nuclear-armed Iran and the Tehran's growing regional influence.

While most Gulf countries remained silent in the first hours after the deal was reached in Geneva, Israeli Prime Minister Benjamin Netanyahu wasted little time in criticizing it, calling it a "historic mistake" and saying he was not bound by the agreement.

Speaking to his Cabinet, Netanyahu said the world had become a "more dangerous place" as a result of the deal. He reiterated a long-standing threat to use military action against Iran if needed, declaring that Israel "has the right and the duty to defend itself by itself."

Sunday's agreement is just the first stage of what is hoped to bring about a final deal ensuring that Iran does not develop a nuclear weapon.

Under the deal, Iran will curb many of its nuclear activities for six months in exchange for limited and gradual relief from painful economic sanctions. The six-month period will give diplomats time to negotiate a more sweeping agreement.

The package includes freezing Iran's ability to enrich uranium at a maximum 5 percent level, which is well below the threshold for weapons-grade material and is aimed at easing Western concerns that Tehran could one day seek nuclear arms. International monitors will oversee Iran's compliance.

For Iran, keeping the enrichment program active was a critical goal. Iran's leaders view the country's ability to make nuclear fuel as a source of national pride and an essential part of nuclear self-sufficiency.