'Never too old' to take up exercise - MyJoyOnline.com

‘Never too old’ to take up exercise 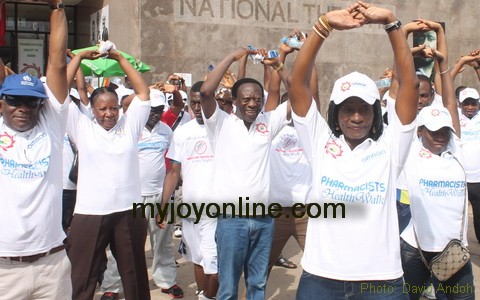 Taking up exercise in your 60s will still help stave off major ill health and dementia, research suggests.

The study in the British Journal of Sports Medicine followed 3,500 healthy people at or around retirement age.

Those who took up exercise were three times more likely to remain healthy over the next eight years than their sedentary peers.

People who took up exercise in their 60s were also less likely to struggle with day-to-day activities such as washing and dressing.

After eight years of follow-up, a fifth of the participants were defined as healthy – not suffering from any major chronic mental or physical illness.

This group was largely made up of people who always exercised and relative newcomers to exercise. Few were people who did no exercise at all.

Doing regular exercise throughout your life is ideal, say the researchers, but there are health benefits to be had even if you are a late starter.

Lead investigator Dr Mark Hamer, from University College London, said: "The take-home message really is to keep moving when you are elderly.

"It's [a] cliche, but it's a case of use it or lose it. You do lose the benefits if you don't remain active."

In the study, those who had regularly indulged in moderate or vigorous physical activity at least once a week were three to four times more likely to be healthy agers than those who had remained inactive, even after taking into account factors such as smoking.

Dr Hamer says physical activity does not necessarily mean going to the gym or going for a run – gardening or walking to the shops also counts.

The Department of Health recommends all adults, including those over 65, do 150 minutes of physical activity a week.

Doireann Maddock, of the British Heart Foundation, said: "It's well worth getting into the habit of keeping active, as we know it can help reduce the risk of heart disease along with many other conditions.

"Every 10 minutes counts, so even hopping off the bus a couple of stops early or taking a brisk walk on your lunch break will help."