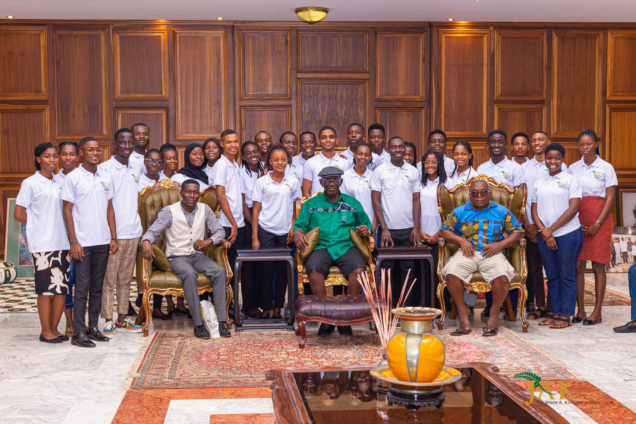 Former President John Agyekum Kufuor is urging newly recruited members of the Kufuor Scholars Program to approach leadership with nationalistic mindsets, instead of being partisan in their posture.

He said partisan-oriented approaches to leadership do not allow for good governance and must be avoided.

The former president made the remarks when members of the 7th intake class of the Kufuor Scholars Program who were recruited in December 2022, paid a courtesy call on him at his residence in Aburi.

The coordinator of the Kufuor Scholars Program at the John A. Kufuor Foundation Dr Pascal Brenya led the 30 tertiary-level students to the former president.

The group consists of 14 females and 16 males.

The former president launched the Kufuor Scholars Program in 2014 to offer mentoring and coaching opportunities for tertiary students.

The initiative has the overarching objective of mentoring a critical mass of future change agents who are imbued with a strong sense of patriotism.

It seeks to imbibe the former president’s effective leadership skills in these tertiary-level students so they can help develop the nation.

The program organises boot camps, mentoring sessions, workshops, and related activities that aim at transforming the lives of these young people. More than 150 young people have benefitted so far.

President Kufuor told the selected scholars they should consider themselves privileged and maximise the opportunities that being in the Scholars Program will offer them over the next three years and beyond.

He said he was confident the students will grow into influential leaders in the future and urged them to serve without discrimination of tribe, religion, origin, etc.

He commended them for beating the competition from others to become Scholars.

The Scholars thanked the former President and assured him they will do their best to keep his good name undamaged.

DISCLAIMER: The Views, Comments, Opinions, Contributions and Statements made by Readers and Contributors on this platform do not necessarily represent the views or policy of Multimedia Group Limited.
Tags:
John Agyekum Kufuor
Kufuor Scholars Program