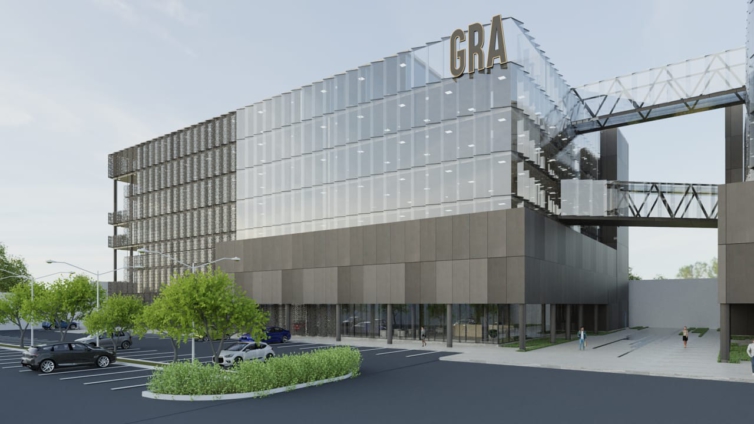 Construction works on the new head office of the Ghana Revenue Authority (GRA) is currently underway.

GRA operates mainly from its head office situated off Starlets ’91 Road at the Ministries Area.

This building, together with its annexes are legacies of the former revenue agencies that merged to become the GRA.

Over the years, GRA has renovated and refurbished its current head office buildings to make them fit for purpose.

Therefore, the decision to build its own ultra-modern and spacious office structure was conceived by the Board and Management of GRA to address the office accommodation requirements of the Revenue Agency.

When completed, the new GRA head office complex would boast of a seven-storey twin tower with a total office area of 13,725 square meters (sqm) – enough to host all the headquarters staff, who are currently housed in the existing head office at the Ministries and six other rented buildings in Accra.

It would also save the revenue administration and mobilisation agency the payment of more than GH¢4 million in annual rent for head office staff alone.

The construction work started in January this year and is now due to be completed in two years.

It is being executed by Devtraco Builders Limited, which won a competitive tender, at about GH¢491 million.

The company was paid about GH¢74.36 million as mobilisation fees, paving the way for the construction process to begin.

During a media tour of the site on Monday, June 20, workers were seen excavating the ground and finalizing processes for the foundational pillars to be erected.

The Project Manager, Sidney Quaye, said work was progressing smoothly and the two-year timeline would be met. He also gave the assurance that the work is being done on schedule.

The tour was to apprise the media on the progress of work on the project, which GRA described as historic, transformational and necessary to ending the years of renting and the scattered nature of its head office staff due to the lack of a spacious head office facility to accommodate all.

An Assistant Commissioner and Head of Communications and Public Affairs at GRA, Florence Asante, later told the media that the project was long overdue, given its immense benefits to the Authority and the country as a whole.

Mrs Asante said when completed, the project would help to address the office accommodation and parking space constraints facing the authority.

According to her, the current GRA head office at the Ministries was unable to house all the relevant staff.

The Head of Communications and Public Affairs said the rest were operating from the Osu Revenue Towers while others were stationed at the Customs Head Office, all in Accra.

Beyond the inconvenience of not being under one roof, Mrs Asante said it was expensive to run the rented offices.

She said it cost the authority more than GH¢4 million every year to rent the six separate buildings with a total office area of almost 4,600 square meters.

This, she said made the construction of a single office for all staff a necessity, economical and long overdue.

GRA’s Head of Communications and Public Affairs explained that the new head office building would have enough office spaces and adjoining infrastructure for all of GRA’s head office staff.

It would also provide enough parking lots for staff and visitors, thereby eliminating the parking constraints that visitors to the authority’s main head office at the Ministries currently faced.

Conceived around 2016, the GRA head office under construction was initially envisaged to be sited at the Airport Area, opposite the Ministry of Foreign Affairs and Regional Integration, in Accra.

Mrs Asante, however, said it was relocated to the current site at Kanda in line with the government’s decision to host key agencies of the Ministry of Finance in one location to be referred to as the national financial enclave.

She explained that the Kanda site was found to be appropriate for the government’s agenda and it had since been allocated to GRA, the Public Procurement Authority (PPA), among other agencies to start the construction of their head offices.

According to her, the change in site delayed the project timelines but expressed the hope that work would now continue unabated.

She said the Authority and the contractor had also agreed to execute the project in the new site under the same terms as was agreed with the earlier one although the Kanda project was bigger than the one that was to be executed at the Airport Area.

DISCLAIMER: The Views, Comments, Opinions, Contributions and Statements made by Readers and Contributors on this platform do not necessarily represent the views or policy of Multimedia Group Limited.
Tags:
Ghana Revenue Authority
New Head Office