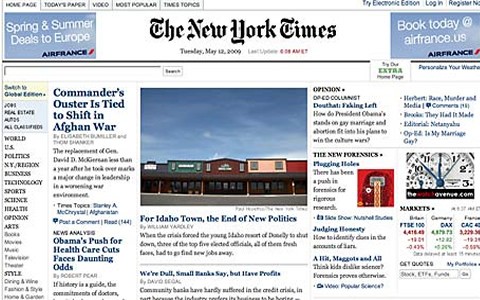 In a sign of the persistent challenges facing the newspaper industry, the New York Times is planning to make deep cuts in its newsroom staff, executives announced Wednesday. More troublingly for the paper, its attempts to gain new sources of revenue through digital products appear to be stalling badly.

The Times said it would seek to eliminate roughly 100 jobs in the newsroom, through either buyouts or layoffs. Additional reductions are expected in the editorial and business departments.

The cuts have been widely expected for weeks.

The paper's own report on the changes noted that the newsroom will lose around 7.5 percent of its employees. That still leaves it with one of the biggest newsrooms in the industry.

In a note to staffers, editor Dean Baquet said that the cuts were needed to keep the Times viable in a digital age. He said that the paper's recent attempts to broaden its digital business, such as the NYT Now and NYT Opinion apps, were "not achieving the business success we expected." One consequence of that: the opinion app will be shuttered completely.

"I will use this as an opportunity to seriously reconsider some of what we do — from the number of sections we produce to the amount we spend on freelance content," Baquet continued.

In a separate note, the paper's publisher, Arthur Sulzberger, Jr., and New York Times Co. CEO Mark Thompson wrote that they were trying to "safeguard the long-term profitability of The Times."

The Times has made staff cuts several times over the past decade.

The cuts continue what has been a torrid first few months for Baquet. He landed in the position of executive editor only after his predecessor, Jill Abramson, was fired in May. In June, he was treated for cancer.

Below, read Baquet's full note to Times staffers, which was obtained by HuffPost's Michael Calderone.

In a letter to the company this morning, Arthur and Mark described the financial conditions that are forcing us to make cuts across the company. While there are promising signs in digital advertising and digital subscriptions, the print business remains under pressure. And our new products are not achieving the business success we expected, even though they are journalistic sensations.

So, regrettably, we are going to have to reduce costs in the newsroom. The masthead and I will be looking for every possible way to do this without harming our stunning report. I will use this as an opportunity to seriously reconsider some of what we do — from the number of sections we produce to the amount we spend on freelance content.

But there is no getting around the hard fact that the newsroom will have to lose 100 jobs. We hope to meet this number through voluntary buyouts. But if we don’t get there we will be forced to do layoffs.

The buyout packages are generous especially for people with decades of service.

If you are represented by the Guild, the terms of the buyout offer have been established by negotiations and agreement with the Guild. Generally, you will receive three weeks of salary for every year worked at The Times, with the potential payout capped at two times your annual salary. In addition, The Times is offering a cash payout of 35 percent of the total severance amount to staff members who have been at the company for 20 years or more. If you are interested in considering a buyout please contact the Guild directly or Erika Sommer in News Administration to receive more information. All requests must be made by Oct. 17 at 5 p.m.

I will reserve the right to say no to people who request a buyout but whose jobs and talents are critical to our mission. Obviously, if we are forced to turn to layoffs, those people affected will not get these enhanced buyouts.

Some of you will find that this offer works for you and your family. I recommend that everyone take this opportunity to have a frank talk with his or her supervisor about whether their goals match those of The Times.

I know how painful this is for all of us, especially since we have been through numerous rounds of buyouts and layoffs. But it is no secret that our entire business is facing continued rough times, and we’ve weathered them better than most, preserving a large and strong newsroom. Our colleagues on the business side have seen even bigger cuts over the past 10 years.

This is a transitional period for The Times. We are accelerating our efforts to build a powerful digital news operation while producing the premier print newspaper that our readers continue to embrace.

Even as we make cuts in some areas we must and will continue to invest strategically. In the coming months, we will work to find and engage new audiences for our journalism. We will also redesign the magazine, create new journalistic features like the Upshot and First Draft, and adapt our journalism to a world where an increasing number of readers find us on mobile.

All of these efforts depend on the continued excellence of our written and visual journalism. And you have my word that even as we are forced to make cuts, we will not stint on our mission. When we come out of this, we will still have the biggest, most ambitious newsroom in the business.

There is no magic bullet for the current financial plight of the news business. But the journalists of The Times, with all of their creativity and belief in the future, have helped guide this company through even more turbulent times. Many of the big successes of past generations — the National Edition, the creation of new feature sections in the 1970s — were pushed by a newsroom willing to change and adapt. We are in that kind of moment again.

I’m clearing my schedule for the next few days so that I can meet with any department that wants to talk as a group. Feel free to reach out to me, Matt, Janet, Ian, Susan, Tom and other senior editors.