Chinese restaurant under investigation for charging $58,000 for dinner

Authorities are investigating a Shanghai restaurant for charging a Dubai tourist and his seven friends a whopping 400,000 yuan ($58,000) for a 20-course dinner.

A photo of the 400,000 yuan receipt from Maggie’s Restaurant started circulating on Chinese social media last month, and although a spokesperson for the restaurant initially claimed that the photo was fake, adding that they don’t even serve some of the dishes listed on the receipt, the owner and master chef at the restaurant, Sun Zhaoguo, later confirmed that Maggie’s did serve the ultra expensive dinner to eight guests, a VIP from Dubai and his friends. Asked about the sum listed on the receipt, Zhaoguo allegedly said “That’s nothing at all in Dubai”.

Restaurant staff had told reporters that the outrageous prices listed on the receipt are “impossible” and the Maggie’s doesn’t charge nearly as much for any of the items on its menu. However, Sun Zhaoguo clarifies that this was privately-tailored for the VIP guests, using expensive ingredients sourced from all over the country. He also cooked the 20 dishes personally, which also bumped up the receipt significantly.

The most expensive items on the receipt are the Crocodile Tail Soup ($2,449), Wild Yellow Croaker – ($2,303) and Half Abalone with Sake Jelly ($1,866), but there was also a surprisingly high Service Fee of $5,542. Here is a translated list of all the items listed on the receipt, according to Shanghaist: 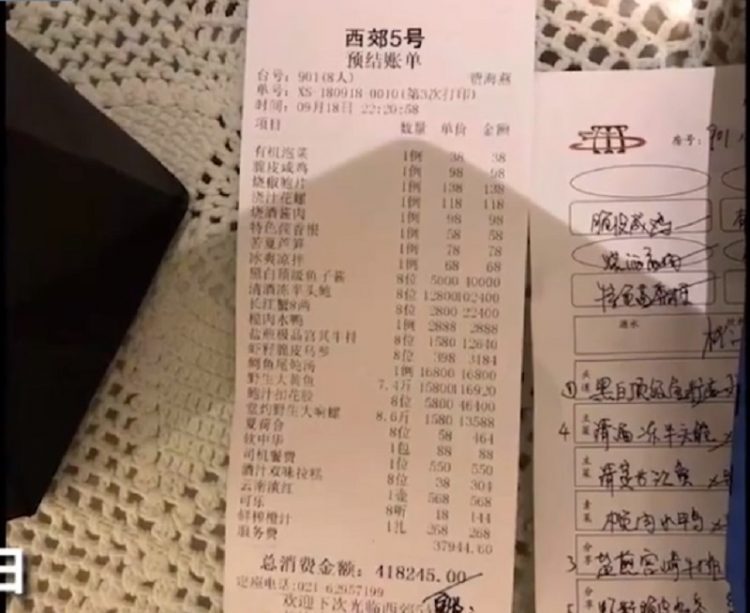 Photos of some of the 20 dishes prepared by Sun Zhaoguo were posted on Weibo by user @Snake_Kane, but later deleted.

Anonymous sources told The Beijing News that on September 19, on the same evening that these rich Dubai patrons allegedly had the 20-course dinner at Maggie’s, a group of “rich second generation” guests also consumed 480,000 yuan worth of expensive drinks. It’s unclear whether the Dubai guests were actually these mysterious rich Chinese.

Thierry Henry: How would former Arsenal and Barcelona forward do at Monaco?