World's 'loneliest' frog gets a date

A frog believed to be the last of his kind in the world has been granted a reprieve from solitude.

Romeo, known as the world's loneliest frog, has spent 10 years in isolation at an aquarium in Bolivia.

Scientists say they have found him a Juliet after an expedition to a remote Bolivian cloud forest.

Five Sehuencas water frogs found in a stream were captured, with the goal of breeding and re-introducing the amphibians back into the wild.

Teresa Camacho Badani is chief of herpetology at the Museo de Historia Natural Alcide d'Orbigny in Cochabamba City and the expedition leader.

She is optimistic that opposites will attract, even in frogs: "Romeo is really calm and relaxed and doesn't move a whole lot," she told BBC News. "He's healthy and likes to eat, but he is kind of shy and slow."

Juliet, however, has a very different personality. "She's really energetic, she swims a lot and she eats a lot and sometimes she tries to escape."

The five frogs - three males and two females - are the first Seheuncas water frogs to be seen in the wild for a decade, despite previous searches in the Bolivian wilderness.

Romeo was collected 10 years ago when biologists knew the species was in trouble, but was not expected to remain alone for so long.

He attracted international attention a year ago over his search for a mate, and was even given a dating profile.

The newly discovered frogs are now in quarantine at the museum's conservation centre, where the race is on to stop the species from becoming extinct. 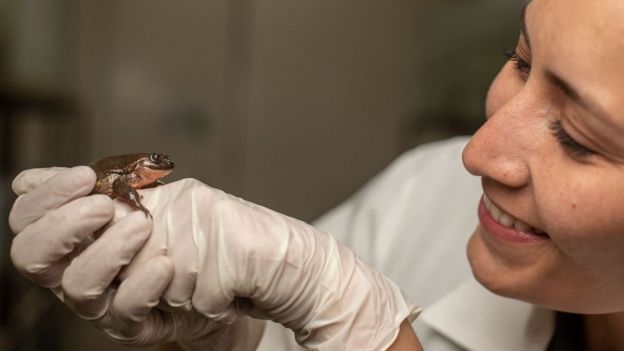 Chris Jordan of Global Wildlife Conservation, which is supporting conservation efforts, said there is risk to taking animals into captivity.

However, there are too few of the frogs in the wild to maintain a viable population in the long term, he said.

"We have a real chance to save the Sehuencas water frog - restoring a unique part of the diversity of life that is the foundation of Bolivia's forests, and generating important information on how to restore similar species at grave risk of extinction." 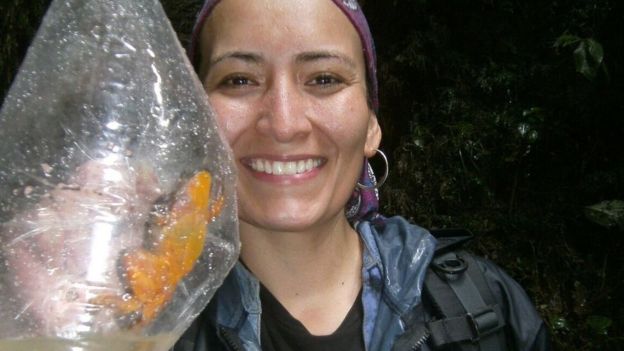 More frogs were found on an expedition

The re-discovered frogs will be treated to protect against an infectious disease, chytridiomycosis, which is wiping out amphibians around the world.

Romeo will then meet Juliet, in an attempt to produce offspring that can eventually be put back into their natural habitat.

In Bolivia, 22% of amphibian species face some degree of extinction threat, from habitat loss, pollution and climate change. 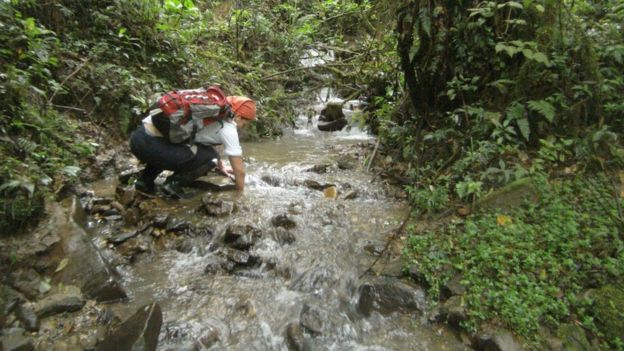 Searching the streams for frogs

Teresa Camacho Badani says Romeo's story is important to draw attention to the plight of amphibians.

They did not find any other water frogs in adjacent streams, raising worrying questions about the health of the ecosystem.

"It's a really good opportunity to use Romeo to help understand those threats, help understand how to bring those species back from the brink but also at the same time to take advantage of the global profile that Romeo and his species has now," she said.

Other amphibians such as the Mallorcan midwife toad in Spain and the Kihansi spray toad of Tanzania have been bred and reintroduced from just a few individuals in the past.

"They provide hope in the context of this sixth mass extinction that there are solutions to maintain our wonderful biodiversity, to protect endangered and even extinct-in-the-wild species and bring them back and restore some of the beauty of these ecosystems," said Chris Jordan.

All species are important and should not be underestimated as their DNA represents millions and millions of years of evolution, he added.