Residents in Cape Coast and surrounding towns in the Central region are in a water supply crisis as they continue to bear the brunt of illegal mining in River Pra.

JoyNews Central regional correspondent reports, residents hunt for water as the taps have run dry – because the Sekyere-Hermang water treatment plant is choked with turgid water.

The plant in the Western region, built in 2008 for €40m, sips a portion of the 240km Pra River and treats it for onward pumping into Brimsu waterworks in Cape coast.

From the waterworks, an expansive water distribution network allows treated water to arrive in homes in Ayensudo, Attabadze, Komenda,Edina-Eguafo-Abrem and Cape Coast all in the Central region.

The Sekyere-Hermang water treatment plant pumps 2million gallons of water every day for Cape Coast and its environs.  But source of the treatment plant, the Pra River is Ghana’s poster picture of the effects of illegal mining. 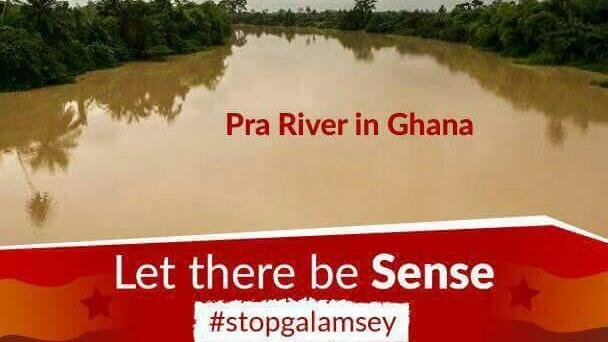 Ghanaian collaborators and foreigners, mainly Asians have pursued their dreams of gold and turned the river into a nightmare of poisoned streams. A reckless search for rich minerals has left the communities poorer.

The waterbed is left unsettled, poisonous chemicals are drained into the river, affecting fish stock. There was a report of an increase in typhoid fever traced to the use of polluted Komkowu river in the Amansie West district of the Ashanti region.

Illegal mining activities is making it difficult and expensive to treat for human consumption.

Chief Manager of the Ghana Water Company (GWC), Emmanuel Kofi Opoku, told the reporter “unfortunately, the galamsey activities has made siltation and turgidity very heavy. As a result our pumps have become faulty.”

Cape Coast and its environs hold about 200,000 residents and the faulty pumps has left at least half of the city and its environs without water. Elmina is among the worst hit towns as the crisis enters its fourth week.

The Ghana Water Company has ordered for a decommission pump from Tamale to help deal with the choked pumps, he said.

It costs more to treat turgid water and less water is made available for consumption as more goes waste, the GWC MD Dr. Clifford Braimah  complained. “We are not even able to meet our operational cost.”

Minister for Sanitation and Water Resources Cecilia Abena Dapaah charged residents to be vigilant in reporting the activities of the “bad and evil” miners. She said a taskforce will be put in place to police the activities on the Pra river.

The government has waged a fight against illegal mining since August 2017, putting soldiers and police officers on the ground to roam and comb Ghana’s four mining zones.

The fight has recorded mixed successes.

A report from the Ghana Water Company that made a case for tariff increase said  the menace of mining in water bodies in affecting water production in stations including Kibi, Osino, Anyinam, Bunso, Daboase, Obuasi.

Last month, a water crisis in Sekondi-Takoradi metropolis in the Western region was traced to activities of a quarry company in the Anankore river.

Photo:The Osamdoduo quarry company has been excavating rocks from the river bed, planting dynamites there.

The water body is the main source of water for the Ghana Water company’s treatment plant in Intchaban. The result – 4million gallons of water pumped per day has dropped sharply – to 1.4million gallons per day.

In Manso Tontokrom, a farming community in the Amansie West District, residents have been forced to resort to the use of sachet water for daily house chores, as mining activities pollute their water sources.

The Komkowu River that serves the main source of water has been inundated with poisonous chemicals through illegal mining activities.