A Chinese woman recently took to social media to express her surprise at the gift she received from her boyfriend of May 20, one of three annual romantic holidays in China. She apparently received the usage rights to 210 hectares of the open ocean.

Located off the coast of Shandong province, near Cheniushan Island, the stretch of ocean previously belonged to a fish farming company and was acquired by the woman’s boyfriend via online auction.

While not the most romantic gesture in history, it definitely gave the woman a chance to boast about her unusual gift on social media.

Local media in China’s Shandong province published screenshots from popular social app WeChat that appeared to show the woman telling her friends that her boyfriend had surprised her by buying her “part of the sea” after she complained to him about forgetting about her May 20 gift.

She even shared a screenshot of the auction page that shows both the winning bid price as well as a map location and pictures of the ocean area.

While some of the people commenting on the viral social media post seemed amused by the boyfriend’s “romantic” gesture, most expressed disbelief and even labelled the whole thing fake. After all, how could someone just buy usage rights to a piece of the ocean? Well, apparently they can. 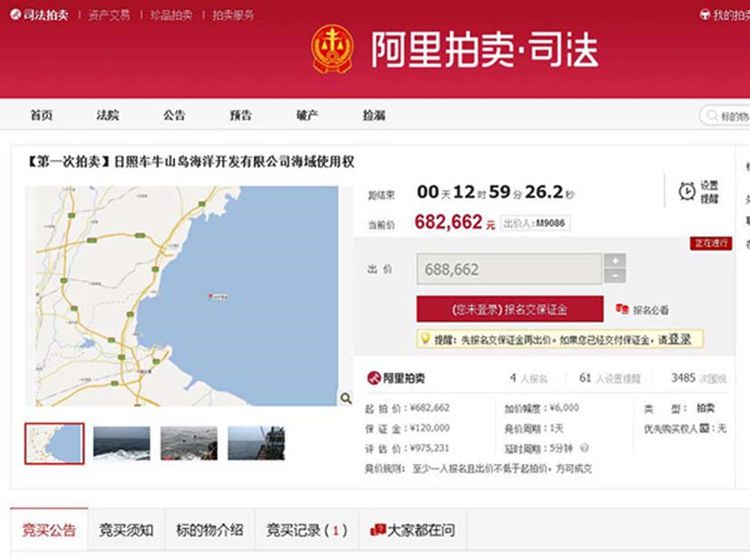 “Property law states that territorial waters belong to the country and cannot be sold or bought. However, the country also protects usage rights that are acquired legally,” the lawyer said.” According to China’s law on sea area use, organizations and individuals can apply for sea usage rights with the marine affairs administrative department.”

Furthermore, people who obtain the rights to such areas can transfer, rent or mortgage them at any point during the lease. It’s not clear what the woman plans to do with her 210 hectares of ocean, and some claim that her boyfriend’s gesture isn’t very practical.

“What’s the point of auctioning usage rights for the sea? Is he bidding for a fish farm because his girlfriend likes seafood?” one Weibo user commented.