From elementary school through college, girls are more disciplinedabout their schoolwork than boys; they study harder and get better grades. Girls consistently outperform boys academically. And yet, men nonetheless hold a staggering 95 percent of the top positions in the largest public companies.

What if those same habits that propel girls to the top of their class — their hyper-conscientiousness about schoolwork — also hold them back in the work force?

When investigating what deters professional advancement for women, the journalists Katty Kay and Claire Shipman found that a shortage of competence is less likely to be an obstacle than a shortage of confidence. When it comes to work-related confidence, they found men are far ahead. “Underqualified and underprepared men don’t think twice about leaning in,” they wrote. “Overqualified and overprepared, too many women still hold back. Women feel confident only when they are perfect.”

As a psychologist who works with teenagers, I hear this concern often from the parents of many of my patients. They routinely remark that their sons do just enough to keep the adults off their backs, while their daughters relentlessly grind, determined to leave no room for error. The girls don’t stop until they’ve polished each assignment to a high shine and rewritten their notes with color-coded precision.

This possibility hit me when I was caring for an eighth grader in my practice. She got terrific grades but was feeling overwhelmed by school. Her brother, a ninth grader, had similarly excellent grades, but when I asked if he worked as hard as she did, she scoffed. If she worked on an assignment for an hour and got an A, she felt “safe” only if she spent a full hour on other assignments like it. Her brother, in contrast, flew through his work. When he brought home an A, she said, he felt “like a stud.” If his grades slipped a bit, he would take his effort up just a notch. But she never felt “safe” enough to ever put in less than maximum effort.

That experience — of succeeding in school while exerting minimal or moderate effort — is a potentially crucial one. It may help our sons develop confidence, as they see how much they can accomplish simply by counting on their wits. For them, school serves as a test track, where they build their belief in their abilities and grow increasingly at ease relying on them. Our daughters, on the other hand, may miss the chance to gain confidence in their abilities if they always count on intellectual elbow grease alone.

So how do we get hyper-conscientious girls (and boys, as there certainly are some with the same style) to build both confidence and competence at school? 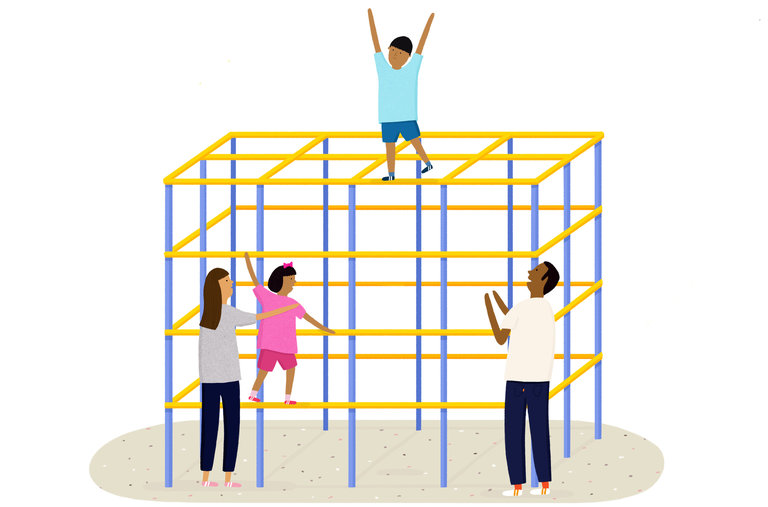 First, parents and teachers can stop praising inefficient overwork, even if it results in good grades. Gendered approaches to learning set in early, so it’s never too soon to start working against them. Recently, as I read “Harry Potter and the Prisoner of Azkaban” to my 8-year-old daughter, I stopped at a passage in which Hermione — the fictional poster child for academic fastidiousness — turned in an essay that was “two rolls of parchment more than Professor Binns asked for.” Hermione, I pointed out, doesn’t make great use of her time. She’s a capable student and could probably do just as well without working so hard. “Right,” my daughter said. “Of course she could!”

We can also encourage girls toward a different approach to school — one that’s more focused on economy of effort, rather than how many hours they put in. Whenever one of the academically impressive and persistently anxious girls in my practice tells me about staying up until 2 in the morning studying, I see an opening. That’s the moment to push them to become tactical, to figure out how to continue learning and getting the same grades while doing a little bit less. I urge my patients — and my own teenage daughter — to begin study sessions by taking sample tests, to see how much they know before figuring out how much more they need to do to attain mastery over a concept or task. Many girls build up an incredible capacity for work, but they need these moments to discover and take pride in how much they already understand.

Teachers, too, can challenge girls’ over-the-top tendencies. When a girl with a high-A average turns in extra credit work, her instructor might ask if she is truly taken with the subject or if she is looking to store up “insurance points,” as some girls call them. If it’s the former, more power to her. If it’s the latter, the teacher might encourage the student to trust that what she knows and the work she is already doing will almost certainly deliver the grade she wants. Educators can also point out to this student that she may not need insurance; she probably has a much better grasp of the material than she gives herself credit for.

Finally, we can affirm for girls that it is normal and healthy to feel some anxiety about school. Too often, girls are anxious even about being anxious, so they turn to excessive studying for comfort. We can remind them that being a little bit nervous about schoolwork just means that they care about it, which of course they should.

Even if neither you nor your daughter cares about becoming a chief executive, you may worry that she will eventually be crushed by the weight of her own academic habits. While a degree of stress promotes growth, working at top speed in every class at all times is unhealthy and unsustainable for even the most dedicated high school students. A colleague of mine likes to remind teenagers that in classes where any score above 90 counts as an A, the difference between a 91 and a 99 is a life.

To be sure, the confidence gap is hardly the only thing keeping women out of top jobs. Women also face gender bias, sexual harassment and powerful structural barriers in the workplace. But confidence at school is one unequal advantage that we can address right now. Instead of standing by as our daughters make 50 flashcards when they were assigned 20, we can step in and ask them why. Many professional men brim with confidence because they have spent years getting to know their abilities. Women should arrive in the work world having done the same.

The Times is committed to publishing a diversity of letters to the editor. We’d like to hear what you think about this or any of our articles. Here are some tips. And here’s our email: letters@nytimes.com.

Lisa Damour is a psychologist in Shaker Heights, Ohio, and the author of “Untangled: Guiding Teenage Girls Through the Seven Transitions Into Adulthood” and “Under Pressure: Confronting the Epidemic of Stress and Anxiety in Girls.”