Scientists have discovered a new bone-eating worm crawling on the corpse of an alligator dropped deep under the Gulf of Mexico.

A new species of bone-eating worm has been discovered by scientists during a study in which they dropped alligator carcasses into the Gulf of Mexico to investigate the deep ocean's ecosystem.

The worm, which has yet to be named, is the first of its kind found in the Gulf of Mexico.

The species was discovered when it crawled on the corpse of an alligator on the ocean floor -- and completely consumed its soft tissue within 51 days.

The study, published in science journal PLOS ONE in late December, was conducted by researchers from the Louisiana Universities Marine Consortium. They intended to investigate ocean carbon supply, hoping to find out how the deep sea, without sunlight, could support the high respiration rates of deep-sea benthos -- the community of organisms that live on the ocean floor.

Researchers believed that the remains of animals may have accounted for the benthos' carbon needs. In early 2019, they placed three alligator carcasses under the northern Gulf of Mexico, at depths of around 2 kilometers (1.2 miles). Within two days, scavengers including giant isopods -- a crustacean related to woodlice -- began crawling on the carcasses and consuming the flesh.

In the report, scientists said they also observed a new type of worm "forming dense patches across the alligator bones, particularly the vertebral column."

The deep-sea creature belongs to the Osedax family, a genus of deep-sea boneworms, and was a new species native to the Gulf of Mexico, which would be named "in due course," the study said 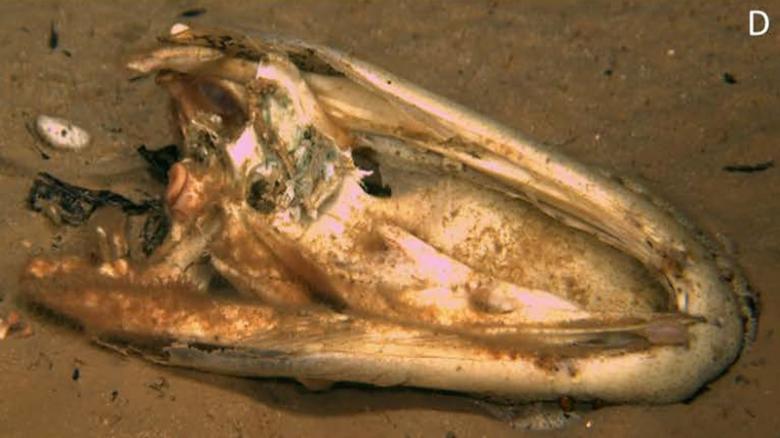 In April, scientists posted a video of one of the alligator carcasses as they first dropped it on the ocean floor, which showed several pink-colored giant isopods crawling on the remains.

Clifton Nunnally, study co-author and researcher from the Louisiana Universities Marine Consortium, said in the video that he hoped to find evidence of any new bone-eating worms that may also be present deep under the Gulf of Mexico.

"The deep ocean is a food desert sprinkled with food oases," he said, while explaining that it may be common for dead alligators, which are native only to the United States and China, to fall to the ocean floor.

"Alligator carcasses are regularly found on beaches and coastlines, and after big storms or hurricanes, alligators have been seen alive 18 miles (29 kilometers) offshore," he added.

In the report, the authors said they believed the worms did not just feed on alligators, as Osedax species in other parts of the world also fed on different types of bones. However, they noted that cow bones dropped in the same area during previous research did not lead to the discovery of the new boneworm species.

"The clade to which the new species belongs is widely distributed from California to Japan to Antarctica, and there is presently no obvious biogeographic pattern to its discovery in the Gulf of Mexico," they added.

Why South Koreans are flipping out over a US ambassador's mustache