Talks between Labour and the government aimed at breaking the Brexit impasse have ended without an agreement.

Jeremy Corbyn said the discussions had “gone as far as they can”, blaming what he called the government’s “increasing weakness and instability”.

Theresa May said the lack of a “common position” within Labour over a further referendum had made talks “difficult”.

The prime minister said she would now consider putting options to MPs on Brexit that may “command a majority”.

But Irish Prime Minister Leo Varadkar called the end of the talks a “very negative development”.

Mrs May has promised to set a timetable for leaving Downing Street following a House of Commons vote on her EU Withdrawal Agreement Bill in the week beginning 3 June.

Brexit had been due to take place on 29 March – but after MPs voted down the deal Mrs May had negotiated with the bloc three times, the EU gave the UK an extension until 31 October.

This prompted negotiations between the Conservatives and Labour to see if the parties could come to a Brexit agreement, despite differences over issues including membership of a customs union and a further referendum.

But in a letter to the prime minister, Labour leader Mr Corbyn wrote: “I believe the talks between us about finding a compromise agreement on leaving the European Union have now gone as far as they can.”

The move towards choosing her replacement meant “the position of the government has become ever more unstable”.

He later said his party had negotiated “in good faith and very seriously, and put forward a lot of very detailed arguments”, which he thought was “the responsible thing to do”.

He added: “The issue [is] that the government has not fundamentally shifted its view and the divisions in the Conservative Party mean the government is negotiating with no authority and no ability that I can see to actually deliver anything.”

Speaking after meeting Tory activists in Bristol, Mrs May said: “There have been areas where we have been able to find common ground, but other issues have proved to be more difficult.

“In particular, we haven’t been able to overcome the fact that there isn’t a common position in Labour about whether they want to deliver Brexit or hold a second referendum to reverse it.”

She said the government would consider what had come out of the meetings with Labour and “consider whether we have some votes to see if the ideas that have come through command a majority in the House of Commons”.

Earlier, Mr Corbyn said “very little” discussion had taken place between the parties about putting a range of options to MPs to break the Brexit deadlock.

But both leaders said the cross-party discussions had been “constructive”, with some progress made.

Labour’s favoured plan includes a permanent customs union with the EU, meaning no internal tariffs (taxes) on goods sold between the UK and the rest of the bloc.

It also keeps the option of a further referendum on the table, giving the public a say on the deal agreed by Parliament.

Both scenarios have caused anger among Brexit-backing Conservatives, who claim a customs union would prevent the UK from negotiating its own trade deals around the world after leaving the EU, and who believe another public vote is undemocratic. 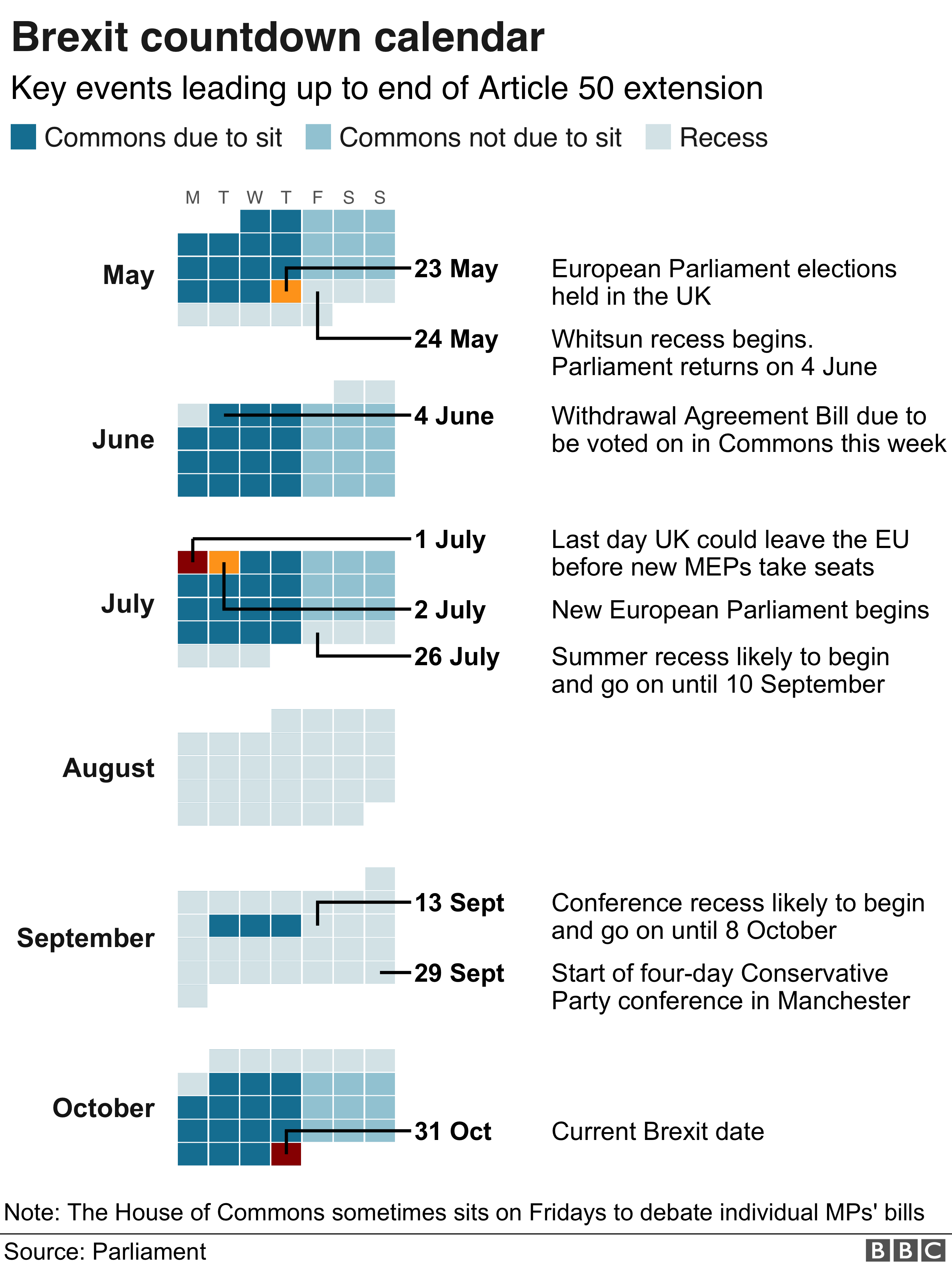 Some MPs have also criticised Mrs May for even entering into talks with Labour, but the prime minister said the government had “no choice but to reach out across the House of Commons”.

The director general of the CBI business group, Carolyn Fairbairn, called the end of the talks “another day of failed politics” and “another dispiriting day”.

She called for Parliament’s recess at the end of this month to be cancelled, adding: “This is no time for holidays. It’s time to get on with it.”

On Thursday, former Foreign Secretary Boris Johnson became the latest MP to put his name forward as a possible successor to Mrs May.

Asked by reporters on Friday if he would be running for the leadership, Environment Secretary Michael Gove said it was now time for colleagues to “focus” on delivering Brexit.