Nigeria, one of Africa’s superpowers, closed all its land borders two months ago to tackle smuggling – but the unprecedented move is affecting trade across the region.

Bustling borders have come to a standstill, with goods rotting and queues of lorries waiting at checkpoints in the hope the crossings will reopen.

The closures were imposed without warning on 21 August – and Nigeria’s neighbours are angry. 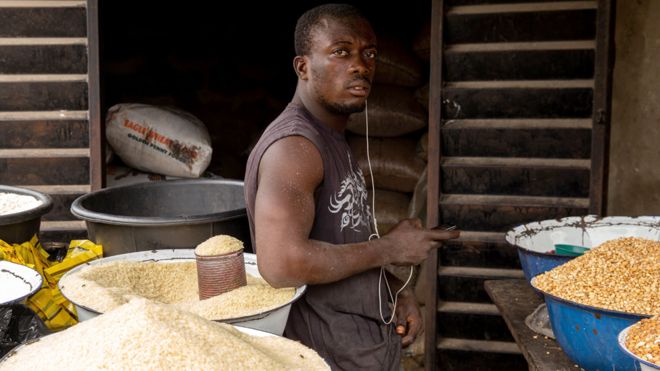 What prompted the move?

Mainly rice. It seems Nigeria was fed up about the flouting of its ban on the importation of rice over its land borders.

Smugglers bringing in rice from Benin appeared to be making a killing.

The biggest contraband route was between Cotonou, Benin’s biggest city, and Nigeria’s commercial hub Lagos, which is just a few hours’ drive away.

According to the World Bank, Benin’s economy is heavily reliant on the informal re-export and transit trade with Nigeria, which accounts for about 20% of its GDP, or national income.

And about 80% of imports into Benin are destined for Nigeria, the bank says.

Nigeria banned the importation of rice from Benin in 2004 and from all its neighbours in 2016, but that has not stopped the trade.

Why is rice so lucrative?

Nigeria is only allowing in foreign rice through its ports – where since 2013 it has imposed a tax of 70%.

The move is intended not only to raise revenue but also to encourage the local production of rice.

But smugglers have been taking advantage of the fact that it is cheaper to import rice to Nigeria’s neighbours.

According to the Nigerian maritime site Ships and Ports, in 2014 Benin lowered its tariffs on rice imports from 35% to 7% while Cameroon erased it completely from 10%.

Neighbouring Benin then recorded an astronomical rise in imports from Thailand, the world’s second-largest producer.

At its height, each of Benin’s 11.5 million citizens would have had to consume at least 150kg (330lb) of rice from Thailand alone.

So it seems pretty clear that the rice was making its way into Nigeria to meet the shortfall in local production for a country of almost 200 million people.

And Nigerians’ appetite for rice is almost insatiable in a country where the grain is a staple.

There was a time was when it was considered an elitist meal consumed only on Sundays. But now its affordability – plus the love for jollof rice – has made it a national dish.

Is it just about rice?

No. Benin is also a major corridor for second-hand cars to Nigeria, where there is a ban on importing cars that are more than 15 years old. 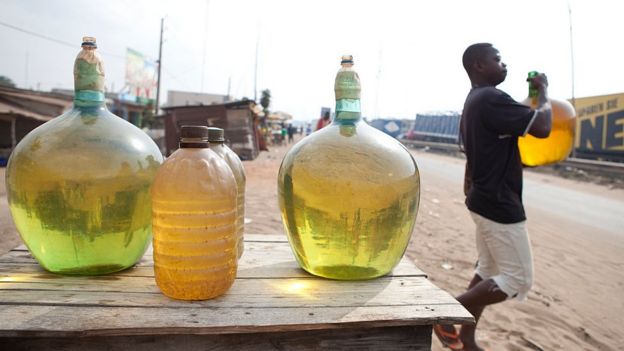 Official figures are difficult to come by, but Luxembourg-based shipping company BIM e-solutions says an average of 10,000 cars arrive at the Cotonou port from Europe monthly.

According to the Nigeria Customs Service, many are smuggled across the border.

The authorities also want to tackle smugglers going the other way. Many sell cheap subsidised Nigerian petrol in neighbouring countries.

In July, the head of Nigeria’s national petroleum company, Maikanti Baru, said petrol smugglers were taking about 10 million litres (two million gallons) out of the country each day.

How has West Africa been affected?

Many goods come in through the port of Lagos and are transported by road throughout the region by hundreds of thousands of lorries.

Nigeria’s immediate neighbours Benin, Niger, Chad and Cameroon – as well as Ghana and Togo have been hit by the crisis. 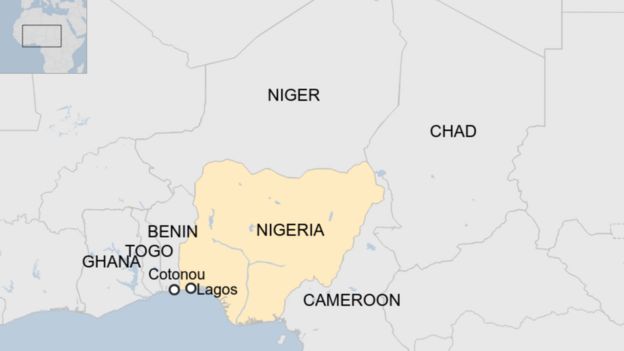 Ghana’s Foreign Minister Shirley Ayorkor Botchwey said the country’s traders had incurred huge losses because their goods had been detained for weeks at the Nigeria-Benin border.

She advised the Nigerian government to “find ways of isolating the issues and the countries that it has problems with, so that Ghana’s exports can enter Nigeria’s market without being lumped up with all these issues that have emerged”.

In Benin, photographer Yanick Folly posted images of baskets of tomatoes, lined up and decaying near the border. 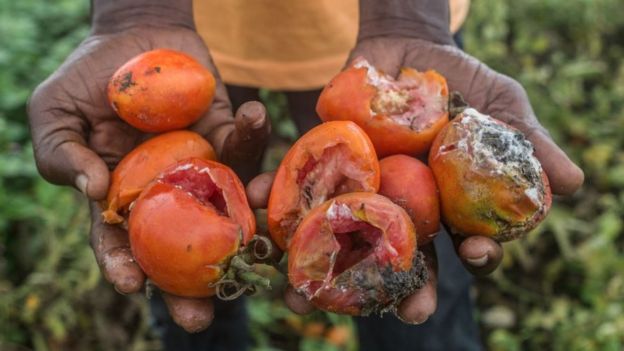 Benin’s Agriculture Minister Gaston Dossouhoui described it as “a distressing sight” when he visited markets in the town of Grand Popo.

“It’s very difficult for our producers. It’s a disaster,” he was quoted by the AFP news agency as saying.

In an effort to mollify its powerful neighbour, Niger has since imposed its own ban on the exportation of rice to Nigeria.

But it is the border communities, where traders often criss-cross for market days, that are suffering.

BBC Hausa reporter Tchima Illa Issoufou in Niger said traders in two border towns she visited were unable to do business as most were not able to cross the border.

And a long line of lorries, most heavy with goods, stands at Maradi close to the border with Nigeria.

Is the move illegal?

The border closure goes against an agreement that guarantees free movement between the 15 members of the West African regional bloc Ecowas. 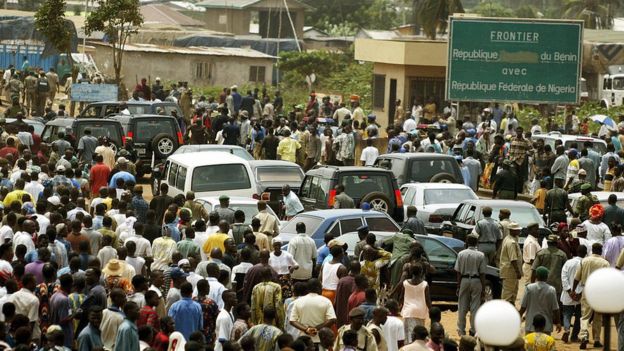 However it is legal for an Ecowas member state to restrict the importation of certain food and agricultural products – and in 2004 Benin and Nigeria agreed to ban 29 foreign products from being imported into Nigeria.

Yet Nigeria’s actions have many questioning its commitment to the historic AfCFTA free-trade agreement, which it signed up to in July that lays the foundation for the creation of the world’s largest free trade area and is intended to boost trade between African countries.

There are those who describe Nigerian President Muhammadu Buhari’s protectionist attitude as “Trumpian”.

But Kalu Aja, a financial analyst in Lagos, says the very fact that Mr Buhari signed AfCTA is proof that he is different from his US counterpart Donald Trump.

“Buhari is not being protectionist but seeking to protect the gains made in local agriculture, in rice especially,” he told the BBC.

“Keep in mind the sea borders are still open, tariffs have not gone up. Trump cut taxes, then cut regulations then imposed tariffs on China, Canada etc.”

How has Nigeria been affected?

In the southern state of Rivers, some traders at the rice depot section of the Mile 1 market in Port Harcourt have packed up and gone home. 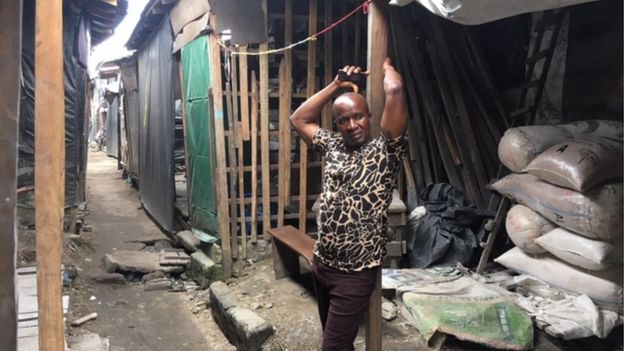 They say the dramatic closure of the borders gave them no time to stock up.

And prices have gone up too. Foreign rice now sells for 60% more, while locally produced rice has increased by almost 100%.

But there has been the up side.

“After the closure of the border and since then, we have maintained an average of about 4.7bn naira to 5.8bn naira on a daily basis, which is far more than we used to collect.”

No-one knows. Nigeria has not said how long it will keep the borders shut to commercial traffic. 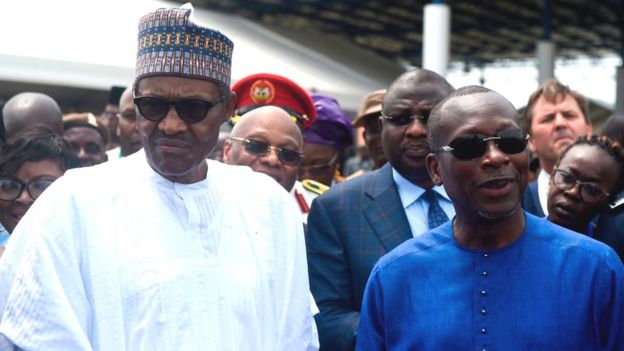 In August, Benin’s President Patrice Talon pleaded with Mr Buhari, on the sidelines of a summit in Japan, for the reopening saying: “Our people are suffering.”

But Nigeria’s customs boss has been quoted as saying the borders will remain closed, blaming neighbouring countries for not doing more to stamp out smuggling.

Some point to corruption at border points as the main culprit behind the smuggling, which implicates Nigerian officials as much as those of its neighbours.

However, as its crude oil exports are not being affected, Nigeria’s borders might remain closed for a while.