The US is lifting sanctions imposed on Turkey nine days ago over its offensive against Kurdish fighters in northern Syria, President Donald Trump says.

His decision came after Russia agreed with Turkey to deploy troops to extend a ceasefire along the Syrian border.

“Let someone else fight over this long bloodstained sand,” the president said in a TV address from the White House.

He was heavily criticised by both Democrats and Republicans for the abrupt military pullout, as the Kurds targeted by Turkey had been key US allies in the fight against the Islamic State group (IS) in the region.

Turkey ordered the military operation against the Kurdish People’s Protection Units (YPG) militia – which it considers a terrorist organisation – on 9 October, days after the US withdrawal was announced.

“The sanctions will be lifted unless something happens that we’re not happy with,” Mr Trump announced on Wednesday.

He said Turkey had assured him that it would halt fighting in the region and would make the recently agreed ceasefire permanent.

Turkey wants to create a 30km (20-mile) deep “safe zone” along the Syrian side of the border free of Kurdish fighters. It wants to relocate there some of the two million Syrian refugees it is currently hosting.

The US Treasury later confirmed that the sanctions, imposed on 14 October on the Turkish ministries of defence and energy, as well as three of the country’s senior officials, had been lifted.

President Trump said on Wednesday he would keep a “small number” of troops in parts of the country to protect oil installations.

He also urged Turkey to commit to securing IS militants, and make sure the jihadist group did not regain any Syrian territory.

A senior state department official earlier said more than 100 IS prisoners had already escaped in the chaos since Turkey’s offensive began, and had not yet been located.

What was in the deal?

President Trump hailed the deal agreed by Russia and Turkey on Tuesday as a “big success”.

It was struck during a pause in Turkey’s offensive, and will see Russian and Syrian troops facilitate the removal of Kurdish fighters in an area up to 30km deep along the border.

Earlier on Wednesday, Russian forces deployed to the two key border towns of Kobane and Manbij. 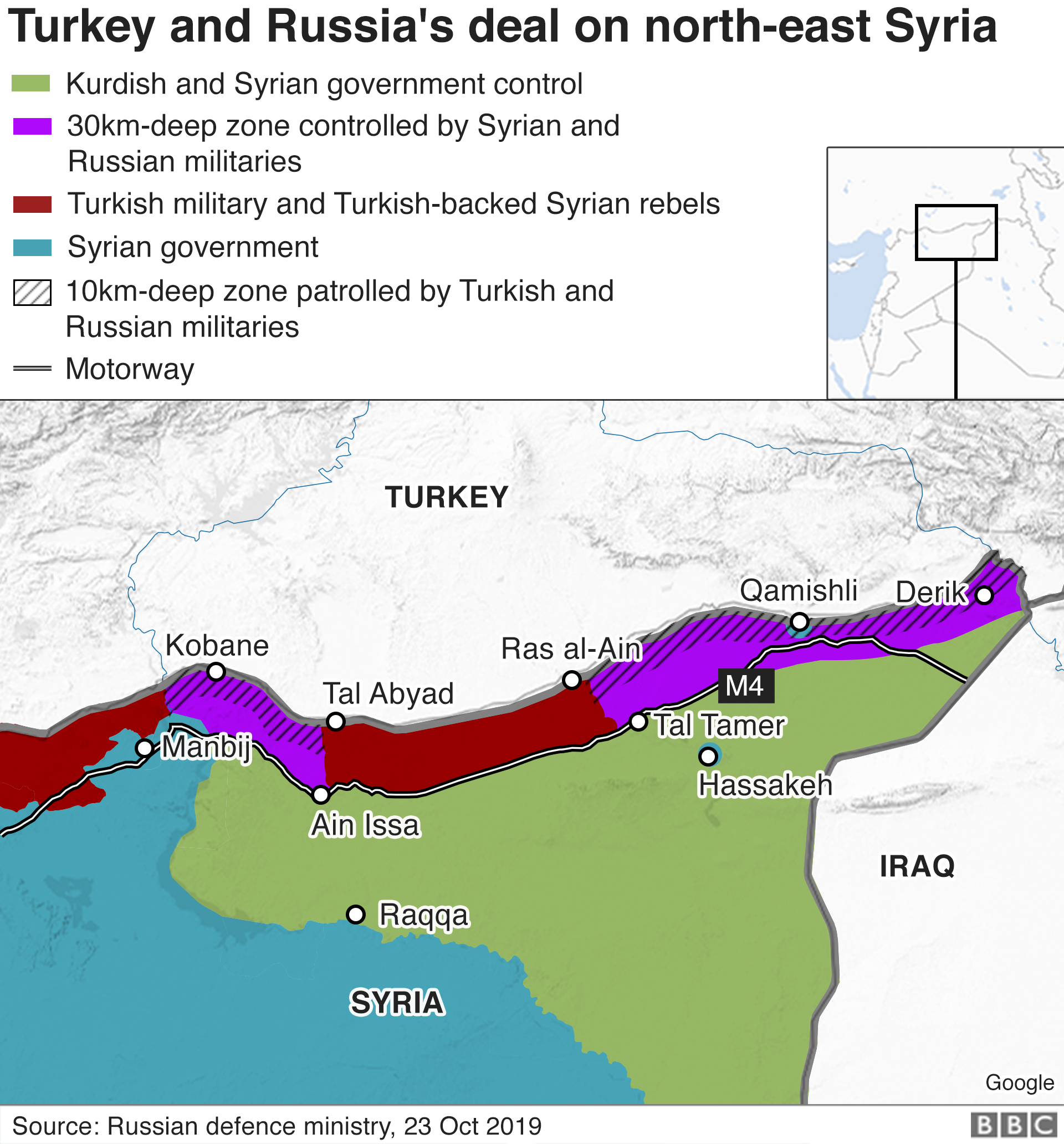 As part of the deal, Turkey will continue to control an area it took in the recent offensive between the towns of Ras al-Ain and Tal Abyad.

The deal also sets out plans for joint Turkish-Russian patrols along the border from next week.

Mazloum Abdi, the head of the Kurdish-led Syrian Democratic Force (which is dominated by the YPG) publicly thanked Mr Trump on Twitter, and said the US president had promised to maintain their partnership.

In a statement, the SDF said Mr Abdi had also thanked the Russian defence minister for saving the Kurds from the “scourge” of war. But he also expressed reservations over some points of the deal, without giving further details.

Turkey halted its assault last week at the request of the US to facilitate the removal of Kurdish forces from the “safe zone”.

What has the cost of the offensive been?

The UN says more than 176,000 people, including almost 80,000 children, have been displaced in the past two weeks in north-east Syria, which is home to some three million people.

Some 120 civilians have been killed in the battle, along with 259 Kurdish fighters, 196 Turkish-backed Syrian rebels and seven Turkish soldiers, according to the Syrian Observatory for Human Rights (SOHR), a UK-based monitoring group.

Twenty civilians have also been killed in attacks on Turkish territory by the YPG, Turkish officials say.