A wild deer which died at a national park in northern Thailand was found to have 7kg (15 lbs) of rubbish inside its stomach, say officials.

Men’s underwear, plastic bags, instant coffee sachets and parts of plastic rope were among the things found inside the male deer’s stomach.

A Khun Sathan National Park official said the deer had been eating plastic for a “long time” before it died.

Earlier this year, a baby dugong in Thailand died after eating plastic.

Mariam the dugong won hearts in Thailand after photos of her rescue went viral. But she died just months after, with an autopsy showing that plastic had caused obstructions in her stomach.

On 25 November, an officer who was on patrol found the 10-year-old male deer in the Khun Sathan National Park in the northern district of Na Noi.

Also found in its stomach were rubber gloves, instant noodles and a small towel.

“We believed it had been eating those plastics for a long time before it died,” Kriangsak Thanompun, a director at the National Park, Wildlife and Plant Conservation Department told BBC News Thai.

“Officials [believe] the plastics had blocked up its alimentary canal [but a] further investigation [will be] launched.” 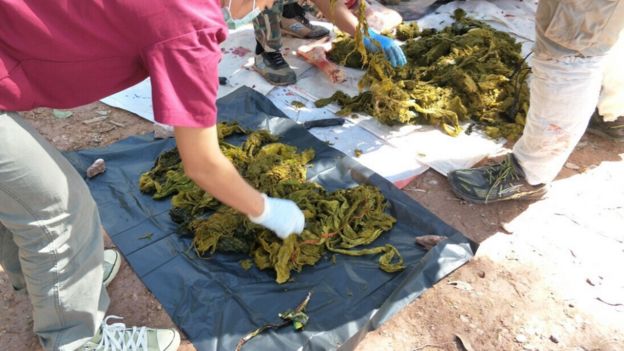 Some 7kg of rubbish was found inside the deer 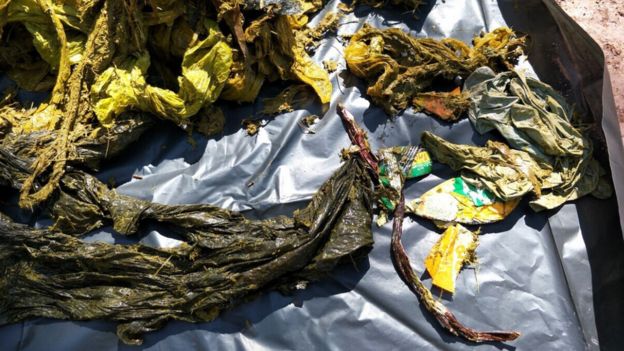 Plastic bags and food waste were among the items found

On social media, many criticised park-goers who had littered.

“When you go into a national park, take your rubbish back. Have some responsibility,” one comment on Facebook said.

Another said it would be hard to get people to pick up after themselves.

“This is something that has to be taught and implemented since a young age. By the time they are adults, it is hard [to change],” another said.

According to Mr Kriangsak, a “three-phase plan” would be put in place, aimed at getting local people to collect plastics and other rubbish in the national park area.

The plan will also look into setting up a committee to deal with waste management and eventually, aim to educate the public on litter prevention.

Thailand is a major user of plastic bags.

Environmental group Greenpeace says that some 75 billion pieces of plastic bags are thrown away each year in Thailand.

The country’s environment minister had in September said that major retailers in Thailand would stop providing single-use plastic bags from January 2020 on.