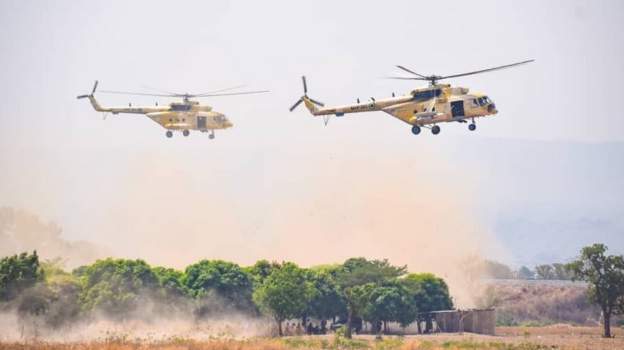 The military has been bombarding the motorbike gangs' forest camps

Nigeria’s military says it has killed 34 members of a motorbike gang in an air raid in the northern state of Kaduna.

It carried out the operation on Wednesday near Mangoro village, an air force spokesperson said.

Armed gangs, locally known as bandits, have stepped up attacks in recent months, carrying out killings and kidnappings for ransom.

In one of their most audacious attacks yet, bandits armed with explosives and guns ambushed a busy passenger train earlier this week that was travelling between the capital, Abuja, and the city of Kaduna.

They kidnapped a number of passengers for ransom and killed others.

The government is facing a lot of criticism for failing to end the violence despite deploying thousands of troops to fight the gangs and bombarding their forest hideouts.