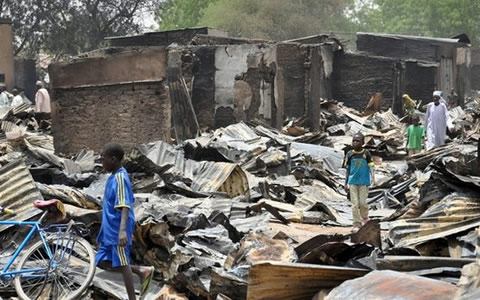 Residents of three villages in northern Nigeria have repelled an attack by suspected Boko Haram Islamist fighters, an eyewitness has told the BBC.

About 200 of the militants were killed during the fighting in the Kala-Balge district of Borno state, he said.

The witness said the residents had formed a vigilante group.

Meanwhile, disgruntled soldiers opened fire on the convoy of a top military commander in Maiduguri, the main city in Borno, witnesses said.

No-one was injured when angry soldiers opened fire as the convoy was entering the Maimalari barracks to protest against poor pay and a lack of equipment to tackle Boko Haram, the sources said.

Maj-Gen Chris Olukolade confirmed an incident had taken place in Maiduguri, but said it was an internal matter and there was no reason for public concern.

It is exactly a year since President Goodluck Jonathan declared a state of emergency in Borno and its neighbouring states of Adamawa and Yobe in an effort to curb Boko Haram's insurgency.

But according to data collected by the University of Sussex in the UK, the figure of civilian casualties blamed on militant attacks has more than tripled since then.

The area which came under attack by the suspected militants on Tuesday is not far from the site of a market massacre in the town of Gamboru Ngala 10 days when more than 300 people were killed by gunmen.

A security official told the Associated Press news agency that the vigilantes in Kala-Balge, which is near Lake Chad, were ready for a fight after learning of an impending Boko Haram attack.

The eyewitness, who spoke to the BBC Hausa Service on condition of anonymity because of security concerns, said the area was littered with bodies after the fighting.

He had seen 50 bodies in one village and 150 in another village, all of which he thought were the corpses of militants.

Residents also seized three cars and a military vehicle from the attackers, he said.

On Tuesday, Nigeria's government said it was ready to negotiate with Boko Haram after it abducted more than 200 girls during a raid on a boarding school in Borno state a month ago.

Their kidnapping has caused international outrage, and foreign teams of experts are in the country to assist the security forces in tracking them down.

On Wednesday, UK Prime Minster David Cameron offered to send a spy plane to Nigeria to help in the hunt.