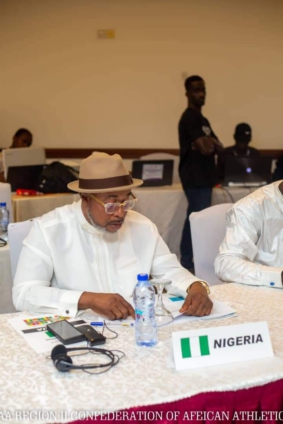 Nigeria’s Tonobok Okowa has been voted president of the Confederation of African Athletics Region II (ECOWAS).

Okowa beat his contender from Benin, Vierin DeGon 9 to 6 in a race that had to go a second round after first round produced seven votes for each presidential candidate after a ballot was wasted as a delegate voted for both candidates.

The elections which took place in Accra on Saturday, January 14, 2023 had 14 of the 15 members in attendance but, Cape Verde the only country absent voted through Guinea Bissau.

Before the election began, Senegal’s Oually Sara and Tchanile Salifuo Falilatou from Togo withdrew their candidature for the presidential position.

The decision of the two left it a two-horse-race between Okowa and DeGon to contest for who succeeds Engr Ibrahim Shehu Gusau who stepped down after the tenure of his mandate.

“I will not seek re-election,” he told Congress. “I have paid my dues to this region. I have many things to take care of in Nigeria so I am busy. Everyone here knows my passion for the development of sports in our region, but it is time to hand over.

“Let me add, and this is to the next administration. The work is not easy. You have a lot to do and you have to sacrifice a lot for the sport,” he warned.

Okowa who described the elections as a shave told JoySports his vision is to develop athletics in the region.

“Since I took over as president of the Athletics Federation of Nigeria (AFN), I have brought tremendous changes and dynamic leadership and I intend to bring the lessons and experience to the region. I know I cannot do it alone; I will need the support of everyone and with one common goal we will succeed.”

Gambia’s Alhaji Doodou Joof was elected Vice President as all delegates voted for him, while Niger’s Aliou Oumarou won the role of Financial Director. For Marketing and Sponsorship, Sierra Leone’s Martin Bangura had the mandate of delegates to lead the association while Ousmane Camara will be in charge of auditing.

Sawadogo Missiri is the technical director.

Kouami Jeannot, Aminata Keita, and Oually Sara are the executive members after polling 11, eight, and seven votes each. Ghana’s Bawa Fuseini keeps his role as Chief Executive Officer after confirmed him as his right hand man for his administration.

The new administration will be in charge for the next four years.

DISCLAIMER: The Views, Comments, Opinions, Contributions and Statements made by Readers and Contributors on this platform do not necessarily represent the views or policy of Multimedia Group Limited.
Tags:
CAA Region II
Confederation of African Athletics II
Tonobok Okowa