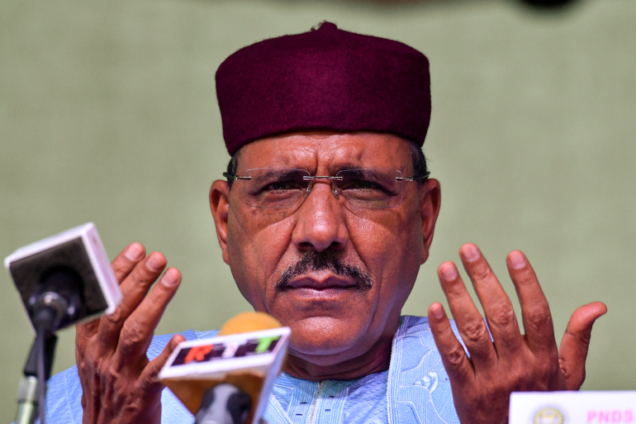 Niger's newly elected president Mohamed Bazoum gestures at his party headquarter after the announcement of his election in Niamey, on February 23, 2021. - On February 23, 2021, Niger's Independent National Electoral Commission (CENI) said in provisional results that Bazoum had been elected with 55.75 percent of the vote, ahead of former president Mahamane Ousmane with 44.25 percent. (Photo by Issouf SANOGO / AFP)

Bazoum’s inauguration on April 2 will mark the West African country’s first transfer of power from one democratically elected leader to another.

“The court confirms and declares the definitive results of the second-round presidential poll of February 2, 2021,” Bouba Mahamane, president of the Constitutional Court, said on Sunday. He said Bazoum received 55.6 percent of the vote while turnout was 62.9 percent.

The results were contested by the opposition and two people died during violence that broke out in the capital Niamey during opposition protests. More than 400 people were arrested during the protests. The court said Mahamane Ousmane, a former president, garnered 44.34 percent of the votes cast.

The court said in a statement that it had canceled the results from 73 polling stations, without saying why. That very slightly reduced Bazoum’s vote tally which had stood at 55.75 percent to Ousmane’s initial 44.25 percent.

The statement did not directly respond to Ousmane’s allegations that the vote was marred by fraud.

President Mahamadou Issoufou is stepping down after two five-year terms.