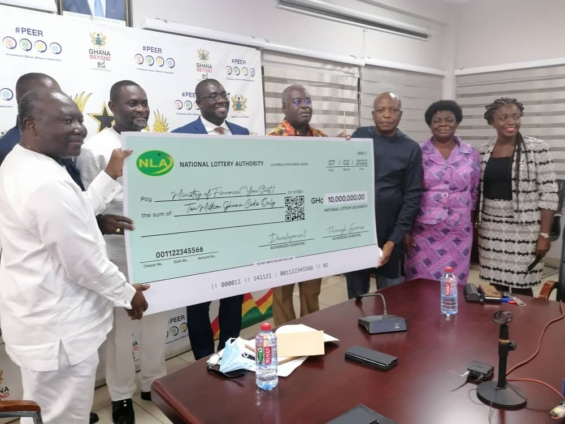 The National Lottery Authority (NLA) has handed over an amount of GH₵10million to support Government’s YouStart initiative.

The donation was made to the Ministry of Finance, the sector responsible for spearheading the flagship programme.

The new initiative which is expected to create one million jobs for the youth will also serve as a vehicle for providing young entrepreneurs access to capital, training, technical skills, and mentorship to enable them operate their own businesses in a space of three years.

Speaking at a short presentation ceremony, the Finance Minister, Ken Ofori-Atta, observed that the initiative would stop a potential disaster in the future.

“I know we announced the YouStart programme with a package of GH₵10 billion which is the largest intervention in the country’s history. The intention is to have government contribute a billion cedis each year for the next years and also look up to our international financial partners to donate another 2 billion that would make it 5 billion Ghana cedis.

“As we mentioned, we were to begin this process of creating an entrepreneurial nation so that our students, our youth would have the capacity to realize their own potential and reduce or mitigate the risk of entrepreneurship.

“So the 10 billion package is critical to begin pushing the wheel for us to be able to get our youth working. We are grateful to the National Lottery for taking the initiative in this regard to stop a potential disaster in the future,” he added.

The Minister also revealed that local banks in the country have agreed to increase their SME portfolio up to GH₵5 billion over the next 3 years; indicating that the initiative will be implemented by the Ghana Enterprises Agency (GEA), the National Entrepreneurship and Innovation Programme (NEIP), and partner financial institutions.

He further noted that young people under the program will benefit from District Level Loans under GH₵10,000 after 2-3 months of training and soft loans of up to GH¢50,000 to help start-ups (in particular by young graduates and school-leavers) and small businesses to expand.

On his part, the Director-General of the NLA, Sammi Awuku emphasized that his outfit was fully committed to pushing government’s development agenda.

Also, the board chairman for NLA, His Eminence Torgbui Francis Albert Seth Nyonyo further assured government of the Board’s support and commitment to the management of NLA to help increase revenue for the year 2022.