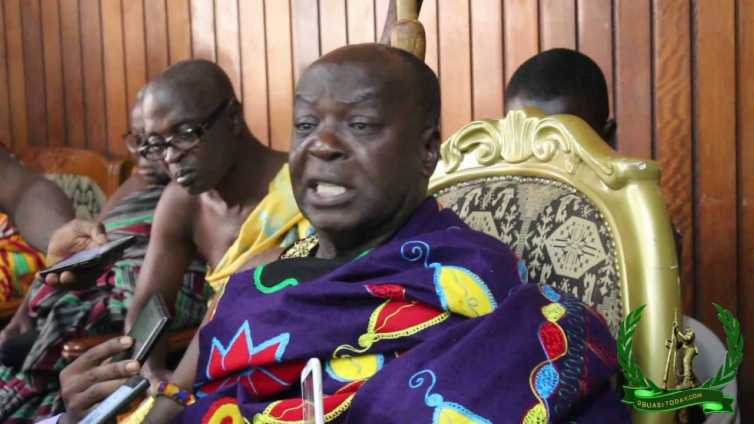 The Chief of Adansi in the Ashanti Region, Opagyakotwere Bonsra Afriyie II says he has evidence of some Municipal and District Chief Executives giving out lands for community mining without permission.

Speaking to the media after some DCEs failed to attend a meeting he scheduled to address issues of mining, the Chief said he is reliably informed by authorities in Accra, that the menace is ongoing.

He added that no one, regardless of their position has the authority to engage in community mining without having a license and following the traditional protocols.

“The traditional protocols go beyond presenting wine to me. Rather, it includes proper and holistic arrangements about compensation, youth employment, among others,” Bonsra Afriyie II said.

He added, “no Municipal, DCE or Sub-Chief within Adansi has the right to give out lands to any individual for community mining,”

Bonsra Afriyie II stated that people are taking advantage of their positions to engage in these activities which affect the community’s environment and water bodies.

“MMDCEs do not have any authority in Adansiman and they do not have the authority to engage in community mining without involving the Chief of Adansi”, he said.

“Even Anglo Gold Ashanti Limited (AGA) respects the traditional protocols talk less of those of you who want to engage in community mining. Hence, we are going to invite you once more to present your licenses,” he said.

Bonsra Afriyie II warned the DCEs and MCEs to stay off the lands and focus on delivering the mandate of the people or lose their respective positions by under performing.

He told the sub-chiefs to be firm in the discharge of their traditional duties because “some people want to take us for granted.”

Bonsra Afriyie II scheduled a second meeting to engage the DCEs on how their action adversely affects the people of Adansikrom.

Speaking on behalf of the MMDCEs, the DCE for Akrofoum pleaded with the chiefs to be patient.

“We are going to honour this invitation and cooperate with the lawyer he has secured for us, so that there will be progress in Adansi area.

“We cannot undermine the authority of our chief in the discharge of our duties,” he added.