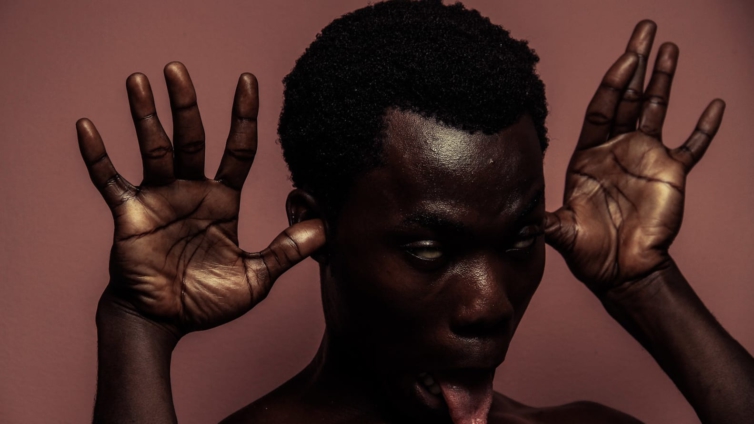 Color is often the focal point of photographer Noma Osula’s portraits, which are as vivid as they are somber.

Cheerful pop and primary colors often dominate, either as background or in the clothes and items worn by his subjects.

But in the scenes’ wider contexts, the vibrancy feels off. In most pictures, the sitters unsmiling, or else their faces are turned away from the camera or hidden behind objects. When they are facing us, their gaze is obscured by sunglasses, hats, veils, or angled to avert our eyes.

“It’s a game of contradictions,” said the 26-year-old Osula Nigerian photographer in a phone interview. “That’s one of the main points in my work.”

His style caught the attention of the British Journal of Photography, which included Osula in its “Ones to Watch” 2018 list; and of fashion designer Jonathan Anderson, who spotlighted his photos in an exhibition championing emerging talent last October.

Born and based in Lagos, Nigeria, Osula has been interested in portraiture since he first taught himself how to use the camera on his final year of university. He found photography to be a fitting medium to express his ideas, and portraiture a compelling genre to display them.

“Capturing people in bright outfits and awkward poses or weird gestures is my way to reflect on what I see around me,” he explained. “I get a lot of inspiration from my locale — Lagos is a chaotic, colorful, energetic place to be in, and that definitely informs my pictures.”

He points to his use of color as an example. “Life in Nigeria is very much defined by color, in a way that’s completely different from the West,” he said. “We have a lot of vibrant patterns all around us, from the clothes we wear to the objects we use.”

The stories his characters tell also mirror Osula’s personal outlook. “They don’t fit with mainstream narratives,” he said. “They oppose them.”

In his 2016 series “The Portraiture,” one image depicts a local chief (a term used in Nigeria to denote a prince or an individual appointed to a traditional position of authority) dressed in traditional attire, blowing bubble gum and wearing a pair of slim sunglasses. The overall effect is humorous and playful, a far cry from the stately poses usually reserved for men in that role.

In another photo, a woman in a strapless yellow dress stands tall against a burgundy backdrop. Her hand, adorned with opulent gold rings, is lifted to touch her face, but we can’t see her: a blue plastic bag completely covers her head.

“Both subjects didn’t care what other people might think of them posing like that,” Osula said. “They were ready to experiment, which is why I chose them. We have a lot of social norms in Nigeria, and Africa in general, when it comes to beauty, identity, sexuality and gender.

Society is quite conservative and conforming. There are set ideas on what’s feminine or macho, from colors to garments to how you behave in public. With the people in my photos, I’m trying to push back on that.”

But Osula’s pictures don’t just want to challenge local customs. They also aim to critique the West’s clout, both past and present, in Africa. When they’re not anonymous, his photographs fully celebrate African aesthetics through the subjects, the textiles, accessories and garments they wear, and the sets that surround them.

“Throughout modern history, western standards have deeply influenced and affected many aspects in African society, including what’s supposed to be aesthetically pleasing,” Osula said. “We’ve been taught to appreciate sharp noses over wide ones, light skin over dark. To shy away from our form of beauty. It’s time to reclaim it and reverse stereotyped perspectives while we’re at it.

“To that end, Osula believes African artists can and must play a pivotal role.”

Most people think of Africa as one big country, not a continent. It’s like, we’re all the same to them. They think it’s a jungle, where people still live in primitive ways and according to exotic notions of beauty. Western photography has often pushed that perspective, as have the media. But we are not primitive,” Osula said.

“I want to project a kind of all-African beauty and show our culture for what it is: modern and bold and daring to defy the norm.”