Thursday’s weather forecast for Northern California calls for high winds and low humidity, conditions that make it close to impossible to contain the 22 major wildfires burning north of San Francisco.

Authorities said 21 people had died and more than 300 were missing. Live power lines lay in the street in burned-out neighborhoods as firefighters battled dry conditions. All that remained of some neighborhoods are a few blackened chimneys, charred trees and abandoned cars.

The fires are raging across nearly 69,000 hectares of several counties, world famous for vineyards and wineries, some of which were destroyed. 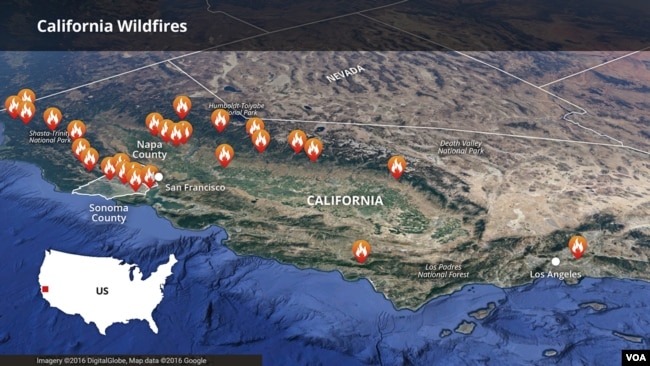 Police blocked off many roads and prevented people from going into the destroyed neighborhoods, where some people said they no longer could recognize streets and surroundings.

But Dave Larson, of Glen Ellen, Calif., sneaked into his destroyed neighborhood to look for his cats and to see if any of his neighbors’ homes still stood. He knew his was gone.

“This to me is like a nuclear bomb went off,” Larson said near his home. “I’ve woken up the last two mornings, thinking it was maybe a dream but then I realized I have nothing. I have someone else’s clothes now. It’s bizarre having nothing.”

As he surveyed the damage, he marveled how some of his neighbors’ homes survived. He said he regretted that he hadn’t stayed, like his neighbors, standing on the roof with his hose, fighting the fire himself. But Gordon O’Brien, a fire captain from the city of Alameda, about 70 miles away, said that when a fire is coming fast, there is little humans can do except to save their own lives.

On Wednesday, O’Brien and his crew were stomping out flare-ups, hoping to keep the fire from creating more damage.

“We’re not focused a whole lot on actual containment,” he said. “We’re focused on structure protection and in the fire lines to stop anything else from burning down.”

Larson alerted the firefighters to a person missing from his street. They poked through the person’s home looking for remnants of anything — his wheelchair, for example, but found nothing.

Larson’s classic car collection was a smoldering heap of metal. And his antiques were gone.

But he found something of sentimental value propped up against his melted flat screen TV: his grandfather’s rifle, 100 years old and a memento from World War II. The gun, covered in soot and ash, looked like a burned stick, although its bayonet was still intact. Larson said he wished he had grabbed the gun as he left. 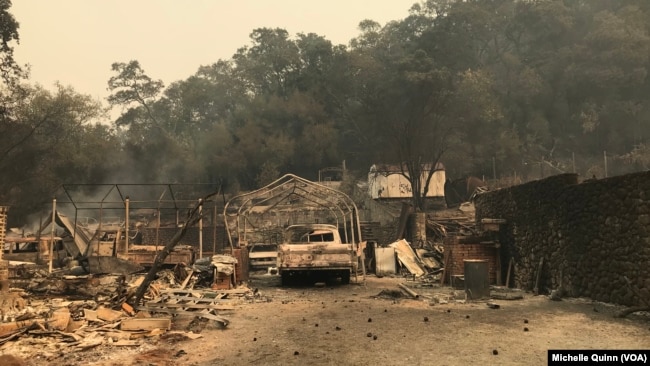 People here have had little time to take stock of their losses. For now, they are hoping to make it through the fire safely.

Authorities do not know the exact cause of these fires, which began Sunday. They say anything from a car backfire to a thoughtlessly tossed cigarette can bring on an inferno.

Strong dry winds blowing across the valleys from the mountains put Northern California at an extremely high risk for wildfires in the late summer and early fall.