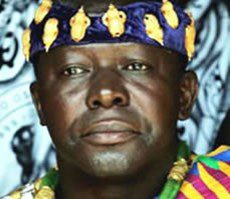 Norwegian police have published the photos and names of two people suspected of involvement in the theft of crown jewels owned by a Ghanian leader at an Oslo hotel, and say at least two stolen items have been retrieved.

The crown jewels belonged to Ashanti King Otumfuo Osei Tutu II and were stolen last week when he was attending a conference in the Norwegian capital.

The two suspects, a man and woman, were believed to be from Central America or South America, Gunnar Thorsen of the organised crime unit of the Oslo police said.

“We are trying to establish their identities,” Thorsen told dpa, noting that the woman used two names.

A third male suspect also from the same region was arrested on Tuesday by Swedish border police at Stockholm’s Arlanda airport. He was expected to be extradited to Norway on Sunday, Thorsen said.

Thorsen said four gold items have been retrieved in connection with the Swedish arrest and police were “100 per cent certain that two of the objects belonged to the king.”

Some of the stolen items had been in the king’s family for 13 generations and were considered invaluable, Thorsen said.

Police leads include hotel security camera footage showing a man leaving the lobby of the hotel with a suitcase believed to contain the jewels, and a car rented in Sweden.

Police have posted photos of the suspects and missing items on the photo sharing site Flickr.