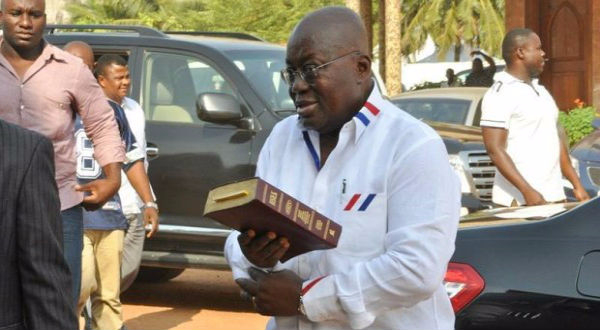 The New Patriotic Party (NPP) is starting a 21-day fasting and prayer for Ghana to seek the favour of God for a peaceful election and for victory for the party in the upcoming polls.

Dubbed ‘The Battle Is The Lord’s: Declaration Towards Victory and the Peace of Ghana’ begins at Koforidua Jackson Park in the Eastern Region Wednesday.

There would also be a candlelight vigil from the evening until Thursday morning.

“Our candidate Nana Akufo Addo himself would be here to fast and pray with us that night and the prayer service would be officiated by Rev. Isaac Owusu Bempah,” coordinator of the event, Jeff Konadu said.

He said other men of God with be partaking in the program to seek the favor of God for the party and country.

Mr Konadu credited the Eastern Regional party chairman, Kingston Kissi and his executive for organising the maiden session adding “the daily night prayer shall continue simultaneously at every single NPP office throughout the region.”

According to him, after Wednesday's session, the other regions take over simultaneously until December 7 stressing "the Lord shall win the battle for us and for Ghana.”