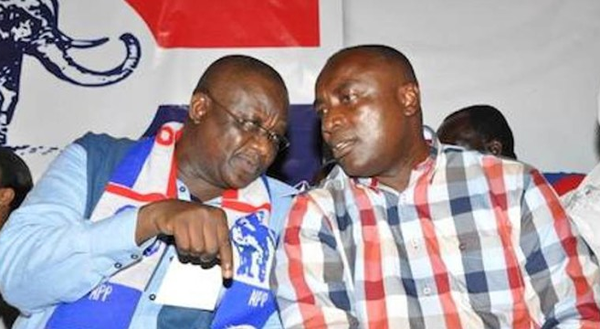 Some card bearing members of the New Patriotic Party are piling pressure on the leadership of the party to begin processes to oust Kwabena Agyepong as its General Secretary.

Mr. Agyepong who is a close ally of suspended chairman of the party, Paul Afoko, also appears to have lost favour with some party members who elected him barely a year and half ago.

A petition to the disciplinary committee of the party dated November 2, 2015 and signed by four party members wants him sanctioned for “exhibiting gross misconduct, and engaging in deals tantamount to venality whiles in his elected position as General Secretary”.

They also accused the General Secretary of still holding out Paul Afoko as the National Chairman contrary to the position of the National Executive Committee.

“Kwabena Agyepong has rubbished, and keeps rubbishing the suspension of Afoko from his chairmanship. This in our view is an act of mischievous contempt for the authority of the Party as a whole, including its elders, its leadership, and its structures.”

They are also citing him for taking unilateral decision as a General Secretary with particular mention of a waiver he gave to some party parliamentary aspirants and the launch of a party card.

According to the petitioners, Kwabena Agyepong's utterances and statements in the media are “always inimical, and counterproductive to the efforts made by the flag bearer, whiles he contributes little or nothing towards building a strong Party, knowing very well that general and Presidential elections are less than a year away.”

They also believed he has been involved in too many misdemeanours which are injurious to the fortunes of the party.

The petitioners are also questioning the allegiance of the NPP General Secretary, accusing him of flirting with the governing National Democratic Congress.