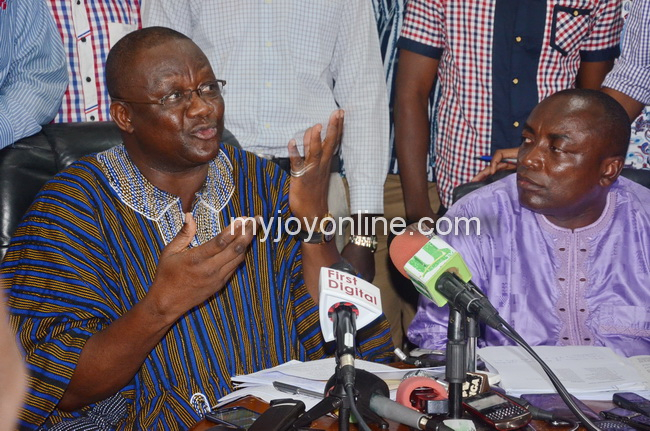 The Council of Elders and the National Disciplinary Committee of NPP have boldly drained, albeit temporarily, the contaminated waters in their own backyard in an effort to prove equal to their fundamental responsibilities of maintaining order, discipline, and civility within Danquah-Busia-Dombo political pedigree.

When the need arose, the party’s Elders as well as the Disciplinary Committee did not bury their heads in the sand any longer, but wisely did what is in the best interest of the party.

Thus, the disciplinary superstructure conducted some deliberations and investigations into the activities of the party’s two top operatives at the national office and culminated in two key decisions: First, it led to the suspension of the National Chairman Paul Afoko and General Secretary Kwabena Agyapong; second, it sent unambiguously civilized message to all the members and its sympathizers that no one is more important than the NPP as national political entity.

If the world is all made up of rational, selfless, non-power-hungry characters, more likely, the likes of “Your Honorables” Paul Afoko and Kwabena Agyapong of the NPP fame would have dignifiedly stepped aside from their respective positions long time ago, till the seemingly impenetrable misty clouds hanging over their undermining operations behind-the-scenes have been demystified. But this world is also replete with irrational, delusional, self-serving, power-hungry, and people who would never admit their faults or find it hard to take responsibility for their wrongdoings. Sadly, these are part of the human ethos.

Some people tend to be narcissistic and predisposed toward seeking attention at every opportunity to the extent that once they found themselves in limelight, they develop some sense of invincibility and sainthood attitudes. That is to say they try to interpret even an indisputable wrongdoing on their part as a product of wicked conspiracy geared toward revenge or jealousy from detractors. In narcissists’ universe, there is no wrongdoing; they’re experts at buck passing.

They will keep putting the blame or their messy woes on the poor Ghanaian media, but the buck stops at their own doorsteps. That is the modus operandi of all narcissists; shifting the blame and playing the victim card. Hence it’s not surprising to hear Mr. Afoko recently lamented in one of the Ghanaian media houses that “Me disrespecting the Council of Elders? No, it’s not true. I don’t think there is any national chairman who has been subjected to what this Council of Elders has done to me”

In fact, a sober reflection of the pair’s leadership activities prior to their inevitable layoffs, showed a party’s two top organizers unapologetically divisive, self-absorbed and behaving as if they were more powerful than the NPP itself. They seemed to have forgotten that the party members elected them to be not more than national chairman and general secretary respectively. In that regard, anyone conversant with cutting-edge political organization might have known that the suspension of Messrs Afoko and Agyapong by the party Elders was long overdue and called for.

Of course, the removal of the two will not guarantee permanent blockage of all the internal cracks, leakages, and divisiveness left in their trails. And as attention-seeking actors, Messrs Paul Afoko and Kwabena Agyapong will still keep engaging in an unguarded pronouncements and likely grant unhelpful media interviews to try to stay politically relevant.

Regardless of what is up their sleeves, the departure of these two “divide and rule agitators”—temporarily or otherwise—is a welcome relief for those who sincerely wish well for the NPP to reorganize and remobilize its forces in unified way to be able to wrestle power from the clueless Mahama-led government in the waning part of this year.

Obviously, the forerunning assertion is not a given that many Ghanaians and perhaps some other political observers may not be tempted to question the rationale behind the party Elders’ move, including the timing of the suspension of the two egocentric leaders. But consider the alternative, if the party overlords had remained silent and timid without taking any action to instill some sanity into the party until the general elections.

Undoubtedly, Messrs Paul Afoko and Kwabena Agyapong would have been more emboldened in their self-centered marathon within the party, because it appeared they harbored a notion that they had “mandate” from the NPP members to stand toe-to-toe with the party’s presidential candidate. Most likely, the basis for this defeatist line of thinking is that, like the party’s flag-bearer, the national chairperson and the general secretary are all elected positions stipulated by the party’s constitution. This made the two suspended leaders thought as elected top party executives the presidential candidate is on the same level as they are. But, that shouldn’t be the case in modern political party.

As I articulated in one of my previous articles, in contemporary political organization and campaigning, soon after a party chooses its presidential candidate, that person becomes the driving force of the party, whether you like him or not, until the general elections are over with.

In this case it means the NPP’s current presidential candidate Nana Akufo-Addo, rather than Messrs Paul Afoko and Kwabena Agyapong, should technically call all the shots of the party till the general elections time. If (say) Nana Akufo-Addo wins the presidency, then he still will run the party in addition to the entire country. The party members and its top executives only form the backline supporting the president or the flag-bearer.

The only time the party top executives at the national secretariat should have total control is during non-presidential election year or if the party has not elected its presidential candidate yet. In a civilized country like U.S., that is how the two major political parties—Republican and Democratic—are organized and run. That is why in America when a party fails to win the presidency, all the blame is placed on the shoulders of the presidential candidate and not on the national chairperson or the secretary.

The Council of Elders and the Disciplinary Committee did the smart thing offloading Afoko, Agyapong, and other non-conformist top executives from the party. Now, what does the NPP under the flag-bearership of Nana Akufo-Addo do next? They need to quickly move on and stay focus on their campaign messages if they have not done so already.

More important, the party needs to ignore the egoistic and vindictive political actors such as Paul Afoko, Kwabena Agyapong, and other ultra attention-seeking elements bent on weakening the party via division and other nefarious theatrics because they can’t have their self-serving ways.

Again, in the near future—maybe right after the general elections—let the Council of Elders deliberates and impresses upon the party to consider amending, especially, the Article 3, Section 5 of the NPP’s Constitution relating to the membership of the party. True representative, democratic, and modern political parties are not organized on “founding membership” precepts. It shouldn’t take a rocket scientist to figure out that particular section of the constitution has produced and empowered narcissistic people like Paul Afoko and Kwabena Agyapong, who are trying to sink the party they claim to love.

By the way, it is unbelievable how political power and little fame change some people to become so vindictive in their actions, especially, someone like Mr. Kwabena Agyapong whose late father, Justice Agyapong, was sadly abducted and cold-bloodedly murdered based mostly on vindictiveness during the dark days of PNDC regime in 1980s. Wonders never end, indeed!

The writer is a former youth organizer of NPP in Manhyia Constituency (Kumasi) in the early 1990s. He is based in the United States and currently teaches political science, critical thinking, and media influences on American culture at the college/university level. He can be reached at: detrio03@aol.com