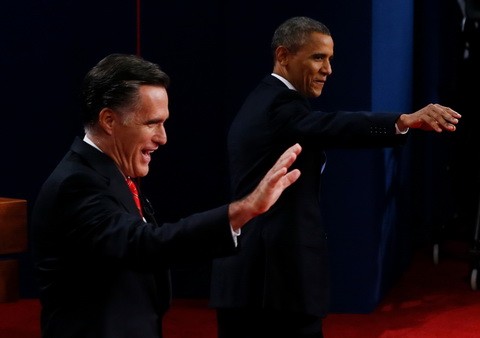 US President Barack Obama and his Republican challenger Mitt Romney have clashed sharply in their second debate.

A fired-up Mr Obama – widely seen as having lost the first debate – came out swinging as they tangled over tax, the economy and foreign policy.

But the former Massachusetts governor fought back aggressively, accusing his rival of a litany of failed promises and having a poor record to defend.

The two men will meet for one final pre-election debate on 22 October.

As he battles for a second term, the Democratic president is trying to hang on to narrow leads in many of the nine key swing states that are expected to decide who will win the White House.

Both men roamed the stage at the town-hall-style debate in New York, circling and frequently interrupting each other.

The 90-minute debate at Hofstra University on Long Island was moderated by CNN chief political correspondent Candy Crowley, who sought to fact-check and occasionally interrupt the candidates.

Mr Obama was much more assertive than during their first debate this month in Denver, Colorado, but Mr Romney more than held his own.

In early exchanges Mr Obama alluded to his bailout of the auto industry, saying that his rival wanted to “Let Detroit go bankrupt”. Mr Romney denied that he had wanted car manufacturers to go bust, and promoted a plan to create 12m jobs.

The pair clashed sharply over energy policy, with Mr Romney noting that fuel prices had virtually doubled in the four years since Mr Obama took office.

Mr Obama insisted that was because the economy was collapsing in early 2009, and quipped that Mr Romney would bring petrol prices back down because his economic policies would against sink the economy.

As the debate progressed, both candidates made repeated and impassioned pitches to America’s middle class.

Mr Obama said he had cut taxes for middle class families and small businesses over the last four years.

But he said that if America was serious about reducing the deficit, the wealthy would have to pay a little bit more.

“Governor Romney and his allies in Congress have held the 98% hostage because they want tax breaks for the 2%,” said Mr Obama.
Pitch to women

For his part, Mr Romney denied that he planned a tax cut for the wealthiest, insisting that the top 5% would continue to pay 60% of total taxes – as they do today.

“Of course it adds up,” Mr Romney rebutted. He cited his experience balancing budgets in business, while running the 2002 Olympics and as governor of Massachusetts.

Asked what he would do to ensure women enjoy equal pay to men, Mr Obama accused Mr Romney of failing to back fair pay legislation passed by the Democrats.

The president also said Mr Romney believed employers should be able to make the decision over whether female employees should have access to contraception through their health coverage.

But Mr Romney said that he did not believe that Washington bureaucrats should decide such matters.

Answering a question from one voter, Mr Obama ticked off a laundry list of achievements over the last four years, saying he had cut taxes for the middle class, ended the war in Iraq, targeted al-Qaeda’s leadership and killed Osama Bin Laden, saved the auto-industry, and introduced his signature healthcare reform.

But Mr Romney said the last four years had not been as rosy as the president would like to portray.

The Republican went through his own list of alleged failed promises by Mr Obama. The Republican said the president had made pledges to deliver unemployment of 5.4%, an immigration plan, and to cut in half the deficit, but had met none of them.

One of the sharpest exchanges of the debate came when the pair clashed over former private equity chief Mr Romney’s wealth.

Mr Obama countered that he did not check his pension that often, adding: “Because it’s not as big as yours.”

On last month’s consulate attack in Libya, which left four Americans dead, Mr Romney hit out at Mr Obama for holding a fundraiser in Las Vegas the next day.

The Republican also suggested the Obama administration had misled the American people over whether or not it was a terrorist attack.

But Mr Obama said it was “offensive” for Mr Romney to imply that his administration would play politics with such a deadly attack.

He also accused Mr Romney of attempting to make political capital out of a national tragedy, by issuing a campaign press release on the issue just after the diplomatic compound had been sacked.

The third and final presidential debate is scheduled for 22 October in Boca Raton, Florida.