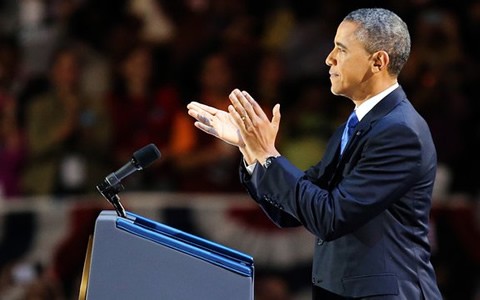 US President Barack Obama vigorously defended his legacy while striking an optimistic tone for the future in his final State of the Union address.

He pushed back against the negative tone of the current presidential race, arguing the US has the "strongest, most durable economy in the world".

"Anyone claiming that America's economy is in decline is peddling fiction," Mr Obama told lawmakers.

The speech to Congress highlighted his accomplishments such as health reform.

However, his focus was on cementing his legacy rather than unveiling new policies.

"For my final address to this chamber, I don't want to talk just about the next year," he said. "I want to focus on our future."

Mr Obama focused on tackling income inequity, using technology to combat climate change and how to maintain national security while not becoming mired in far-flung conflicts.

Finally, he talked at length about improving the state of politics and debate.

"Democracy does require basic bonds of trust between its citizens," he said.

He called on voters and members of Congress to change the divisive tone of politics and to "change the system to reflect our better selves".

Mr Obama took indirect aim to Republican presidential front-runner Donald Trump who has been criticised for his comments about Muslims and immigrants.

"When politicians insult Muslims, when a mosque is vandalized, or a kid bullied, that doesn't make us safer," he said.

"That's not telling it like it is. It's just wrong. … And it betrays who we are as a country."