Obama team bullish on next debate 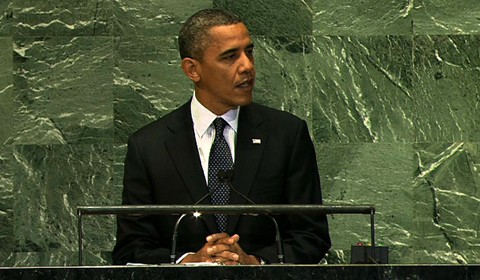 US President Barack Obama’s team says he will make a “strong” comeback in Tuesday’s debate rematch with his Republican challenger Mitt Romney.

Top aide Robert Gibbs says he expects Mr Obama to be “energetic” after his passive showing in the first debate.

The rivals will take questions on domestic and foreign policy from an audience of 80 undecided voters at a town hall-style forum in New York.

With 21 days to go until the election, the race is essentially deadlocked.

As he battles for a second term, the Democratic president is trying to hang on to narrow leads in many of the nine key swing states that are expected to decide who will win the White House.

The 90-minute debate at Hofstra University on Long Island starts at 21:00 EDT on Tuesday (01:00 GMT on Wednesday). It will be moderated by CNN chief political correspondent Candy Crowley.

Mr Gibbs, a senior Obama aide, told MSNBC on Tuesday: “I think you will see somebody who will be strong, who will be passionate, who will be energetic.”

Mr Romney – who has risen in the opinion polls since his first encounter this month with Mr Obama in Denver, Colorado – will aim to pull off another assured performance.

Mr Obama has been preparing for the debate since Saturday at a golf resort in the city of Williamsburg, Virginia. Mr Romney’s advisers are putting him through his paces in his home state of Massachusetts.

“President Obama is going to have a better night than he had at the first debate,” Romney spokesman Ryan Williams said.

He added that the Republican expects his rival to “come out swinging with dishonest and negative attacks”.

After the last debate, Democrats questioned why Mr Obama did not challenge Mr Romney over his policies on tax, healthcare and jobs.

They also complained that Mr Obama had allowed the Republican to soften some of his most conservative stances.

Obama campaign aides say the president will not make the same mistake this time.

But the rivals must also strike a balance between attacking each other without coming across as too negative in front of the audience and the tens of millions of Americans watching on television.

On the eve of the debate, US Secretary of State Hillary Clinton took responsibility for last month’s sacking of the US consulate in Libya, which the Romney campaign has used to attack the White House.

Mrs Clinton said that she – and not the president or vice-president – was to blame for any security lapses before the 11 September assault on the diplomatic compound in Benghazi, which left the US ambassador and three other Americans dead.

The Romney campaign has claimed the Libyan raid shows that the president’s foreign policy is “unravelling”, and the issue could well come up again in Tuesday’s clash.

The third and final presidential debate is scheduled for 22 October in Boca Raton, Florida.