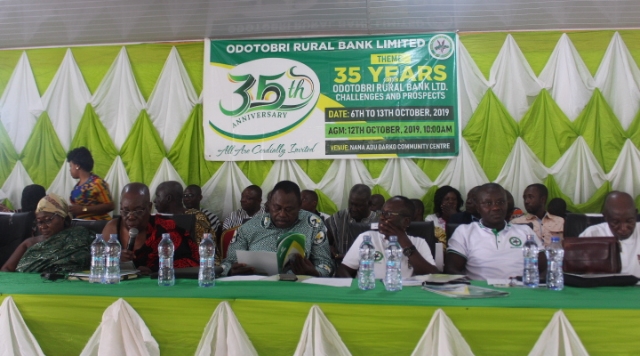 The Management and Board of Odotobiri Rural Bank have said they will not relent in efforts to improve loan quality portfolio of the bank to boost profitability.

It has therefore increased the bank’s loan security by between 140 and 150 per cent, which is higher than the new guideline in the financial ACT minimum benchmark of 120 per cent.

The move has been necessitated by high non-performing loans and credit loss.

At the close of the year, the bank extended total loans and overdraft facilities of GHS37,438,150, representing an increase of 20.08 per cent.

Despite the 20 per cent increase in loan advancement, the bank’s profit declined by 16.62 per cent lower than that of 2017 profit.

Due to the turbulence and volatility in the financial sector, though it made a reasonable profit of GHS2,787,688, it was a decline from GHS3,355,078.

At the 32nd Annual General Meeting, Chief Executive, Siaka Baba Ahmed, says the best way to is to strengthen the credit risk policies so that you will be able to tighten and do away with people who would naturally would not pay loans.

“With the introduction of the new Act, before you give loans to anybody you have to get security which is about 120 per cent of whatever money you are giving out and we have even increased it depending on the sector. If it is a risky sector we go to 140 or 150 per cent.

“Somebody brings you money and you don’t know when they are coming for it but you give it out to some people who will not pay for three to four years,” he Siaka Baba Ahmed said.

Mr Ahmed continues, “So we also have to make sure that whatever money goes out, we try and get it. And you know this time the terrain is very tough, if you don’t manage your risk very well, you will collapse your business.”

The bank is careful to select people who are capable of paying and people with the right business cash flow and people with right security so that even if customers fail to pay, there is something to fall on to cover the loans.

Mr Ahmed reveals the bank is deploying a Mobile Banking Application to enhance customer service experience by end of the third quarter.

This APP, named Odotobiri Mobile App, when deployed will allow customers to access their accounts 24/7 from anywhere in the world.

“That has been tried and tested and it is going to help our customers such that customers will easily do business in this digital age.

Now we are living in a digital age, so people believe that they can use their mobile phone to do a lot of things, so why do you go to the bank physically for every transaction.

If we are able to roll it out, it will reduce the congestion at the banking hall and make banking very easy,” he said.

He believes it is about time the rural banks injected more technology into their operations for accelerated growth.

The initiative is part of the 35th-anniversary celebrations of the bank.

Board Chairman, Asamoah Boateng, says the milestone is critical for the business growth.

Rural banks, we are rural-based so somewhere along the line we had to bring down the interest rate so that we can attract more businesses and it will be a win-win situation

Their business will flourish, they will get profit, and the shareholders can receive dividends”.

Deposit mobilization increased by 21.65 per cent, though profits reduced by 16 per cent on the back of the banking crisis.

According to management, this increase was due to intensified mobilization efforts by directors, management and staff coupled with the growing public confidence in the operations of the bank.

Investments in Treasury Bills and other short term securities recorded an increase of 17.08 per cent during the period under review

Board Chairman, Asamoah Boateng, says the bank has approved payment of a dividend of GHS610,628.46 despite challenges.

Meanwhile, the bank has exceeded its share capital more than 100 per cent.

New banking premises for the Asawasi Branch and another around Santasi Roundabout, will soon be commissioned.

Meanwhile, the bank has secured a licence from the Bank of Ghana to open another branch outside the Ashanti Region.

The bank informed shareholders on its 31st Annual General Meeting that it has settled on Techiman as the location to open the new branch outside Ashanti region.

Our customers should have confidence in us, once you save with us, you can go and sleep, once you have