One dead, two others in a critical condition after accident on Buipe road 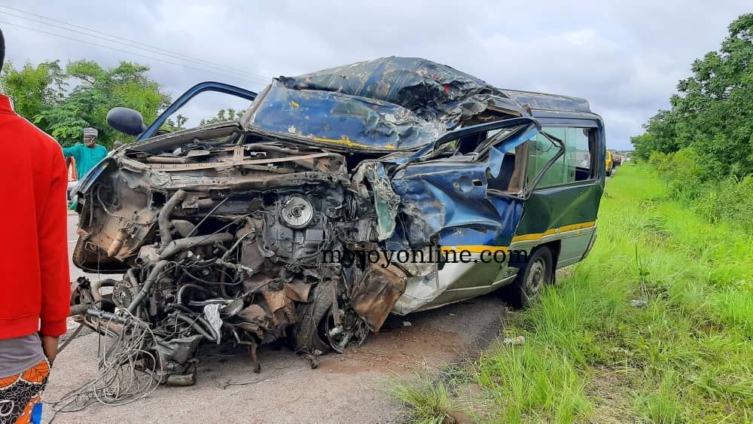 One person has reportedly died while two others have sustained injuries following an accident at Buipe in the Central Gonja District of the Savannah Region.

The accident, which happened on Thursday, August 26, resulted in the death of 41-year-old minibus driver, Issah Shaibu on the spot. The late Shaibu’s car crashed with a Cargo truck.

The deceased driver’s mate, known as Ganiu and the driver of the Cargo truck, Alhassan Abdul-Mumuni, sustained serious injuries

The injured who were first rushed to the Buipe Polyclinic, are now said to be in a critical condition at the Tamale Teaching Hospital in the Northern Region.

JoyNews’ sources at the Buipe Police Station indicated that the Sanyong minibus with registration number AS1703-13 was travelling from Fufulso, heading towards Buipe.

But, upon reaching the Central Gonja District Assembly, the vehicle veered off its lane and ran into the driver side of the Cargo truck with registration number NR 2173 A that was also travelling from Kumasi in the Ashanti Region to Yendi in the Northern Region, resulting in the casualties.

This eye-witness, Muftaw Mutawakilu told JoyNews that he suspected fatigue was the cause of the accident.

“I was going to Ntereso with my motor. I was far behind the Cargo going to Tamale side. But I saw the small bus also far away coming, but later on, I didn’t see the small bus again. Only to hear the crash and see the smoke coming out. So, we all helped the Fire Service people to bring the people out,” he said.

Meanwhile, the Central Gonja Police Command said the command is unhappy with the behaviour of the relatives of the deceased driver.

He stated that they forcibly took away his remains to an unknown location preventing them (Police) from sending the body to the Tamale Teaching Hospital Mortuary for autopsy.

Meanwhile, the two accident vehicles are yet to be towed to the Buipe Police Station.