U.S. president Barack Obama, Michelle Obama and their daughters Malia and Sasha stand at the “Door of No Return” during their visit to the Cape Coast Castle, Ghana, July 11, 2009.

In a recently released music video, Fuse ODG and Damian Marley (Bob Marley’s youngest son) explore the themes of slavery, colonialism, black pride and modern day police brutality. ‘Bra Fie’(which translates from the Ghanaian language Akan as “Come Home”) is an Afrobeats tune that harks back to the pan-Africanist themes of some of the older Marley’s anthemic hits. But it could also be a soundtrack for a potential wave of “homecoming” to Ghana for people of African descent.

August 2019 will make it 400 years since the anchoring of an English ship in Jamestown, Virginia carrying a small group of enslaved Africans. While African slaves had been in other parts of the Americas region (including the United States) before 1619, that year is widely regarded as the commencement of the African slave trade to North America.

In all, the Transatlantic slave trade from Africa to the New World lasted four centuries (1444-1888) and involved nearly all the European powers.

When Brazil became the last country to abolish the slave trade in 1888, an estimated 17 million African women and men had been seized from the continent and transported to plantations across the Americas—a conservative figure that UNESCO admits excludes the many who died on the way and were thrown into the high seas. Many of the enslaved Africans came from West Africa and the present-day nation of Ghana was a significant place of origin. To mark the landmark anniversary, Ghana’s president Nana Akufo-Addo in October, declared 2019 as “The Year of Return”, launching a series of programs that would seek to encourage people of African ancestry to make the“birthright journey home for the global African family.” The idea of a homecoming of “our brothers and sisters” who were taken away is one that Ghana has long fancied and championed.

Birth of a Nation

Right from the founding of the modern nation, early Ghanaian leaders led by the first president Kwame Nkrumah preached pan-Africanism, one that transcended the shores of continental Africa. As a student in 1930s and 1940s America, Nkrumah saw at first hand the racism black Americans endured and it radicalized his own consciousness about Africanness and blackness. In some ways, it was a driving force for him to return home in 1947 and eventually become the lead architect of Ghana’s independence—the first sub-Saharan African country to break free from European colonialism. 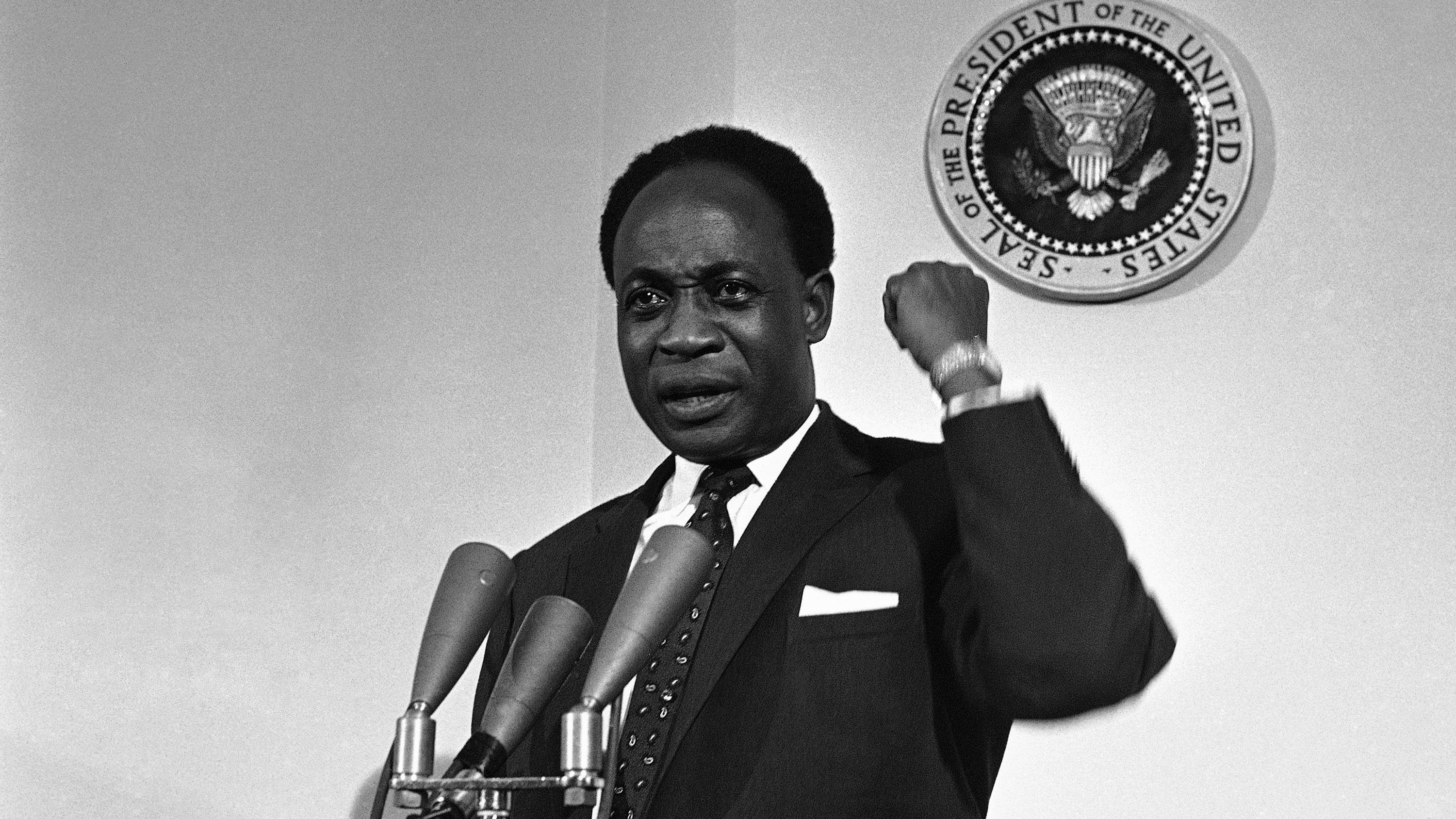 President Kwame Nkrumah speaking at the White House on Mar. 8, 1961

The civil rights movement in the United States was also at its height and many black American leaders at the time felt a connection to this new black African country that had gained self-determination in a largely peaceful manner. Leading civil rights leaders including Martin Luther and Coretta Scott King, Ralph Bunche (the first person of color to win the Nobel Peace Prize in 1950) and Mordecai Johnson (the first African American president of Howard University) attended Ghana’s Independence Day celebration on Mar. 6, 1957.

Nkrumah and Ghana made a huge impression on Martin Luther King, which later inspired one of his famous sermons “Birth of a Nation’upon his return to the US. Malcolm X and Muhammad Ali also made high profile visits to the country years later. The black star on the national flag is inspired by the Black Star Line shipping company founded by pan-Africanist orator Marcus Garvey, which had the grand ambition of facilitating the return of African Americans to the motherland.

Accra has also been home to black American thinkers and exiles such as Maya Angelou (for three years along with her son Guy), Sylvia Boone (the first tenured black woman professor at Yale University), Julian Mayfield, W.E.B Du Bois and George Padmore, all of whom lived and worked in Ghana. Du Bois and Padmore are buried in the city and their homes are now public libraries.

But even before this period, Accra had long been home to the Tabon people, a group of African slaves in Brazil who returned after a popular slave rebellion. The Tabons arrived in Accra in 1820s and 1830s and their descendants have fully assimilated into Ghanaian social and political life.

Positioning Ghana as the home of global Africa and the place for a spiritual journey of self-discovery has been an idea promoted by governments since Nkrumah. The country has been host to the biennale PANAFEST/Emancipation Day celebration since 1992 and in 2001, the Right of Abode law was passed, giving anybody of African ancestry in the Americas, the right to stay in Ghana indefinitely. On the occasion of Ghana’s 50th independence anniversary in 2007, the Joseph Project was launched to also encourage the descendants of enslaved Africans to return. In December 2016, 34 ‘returnees’ became Ghanaians in a naturalization ceremony attended by then president John Mahama. “I have only restored to you what rightfully belongs to you and was painfully taken away,” president Mahama said after handing out the naturalization certificates.

Dr Ọbádélé Kambon was one of the 34 and has lived in Ghana for 10 years. He first came to Ghana for a visit in 1998 with his mother, Dr Mawiyah Kambon who first came to Ghana in 1972 after adopting the Akan traditional spiritual system. “Back in the 1960s, many of us came to understand that we are not white people so why should we have white names? My parents had that level of consciousness before my birth so they decided to give me the name Ọbádélé which translates from Yoruba as ‘the king arrives [or returns] home,’” he says. 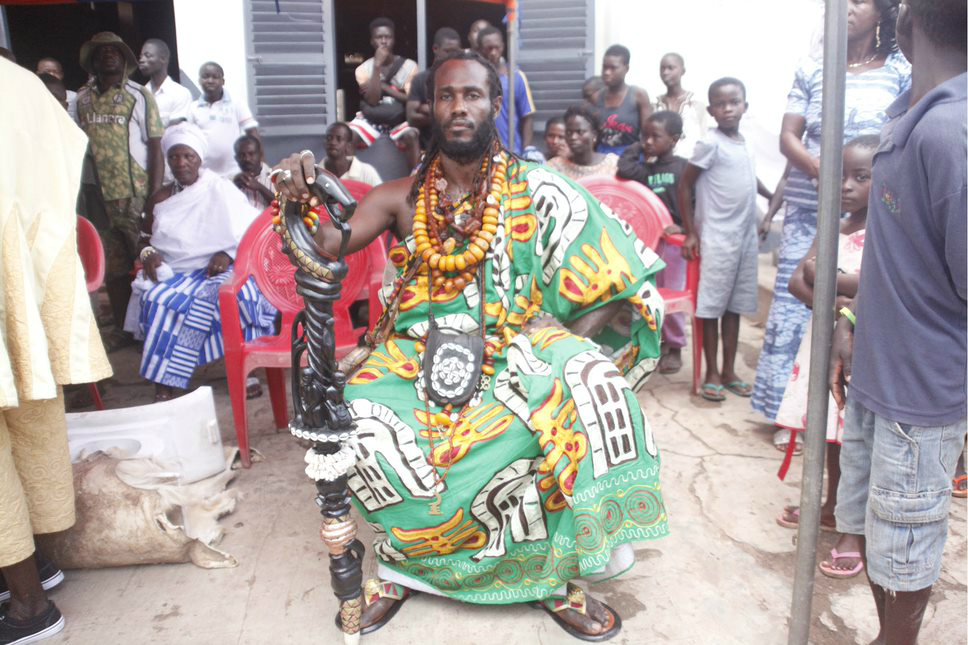 After some years teaching in tertiary institutions in Chicago, Kambon moved to Ghana in 2008 and started his doctoral studies in linguisticsin 2009 at the University of Ghana, where he now teaches at its Institute of African Studies. He is a near native speaker of Akan (Ghana and Ivory Coast) and Yoruba (Nigeria, Benin), proficient in Wolof (Senegal, Gambia) and has some level of competency in Kiswahili (East Africa) and Kikôngo (Angola, DR Congo and Congo Republic).

Kambon, 39, puts Ghana’s hegemony as the home of black people, down to better packaging compared to some of its neighbours. Just like the Islamic pilgrimage to Mecca, Ghana has the infrastructure to back its narrative—by way of the well preserved European slave forts and castles on the coast, where captured women and men were loaded onto ships, never to return home. The visibility of the castles have increased following recent high profile, emotional visits by the Obamas, CNN’s Don Lemon and Colin Kaepernick. 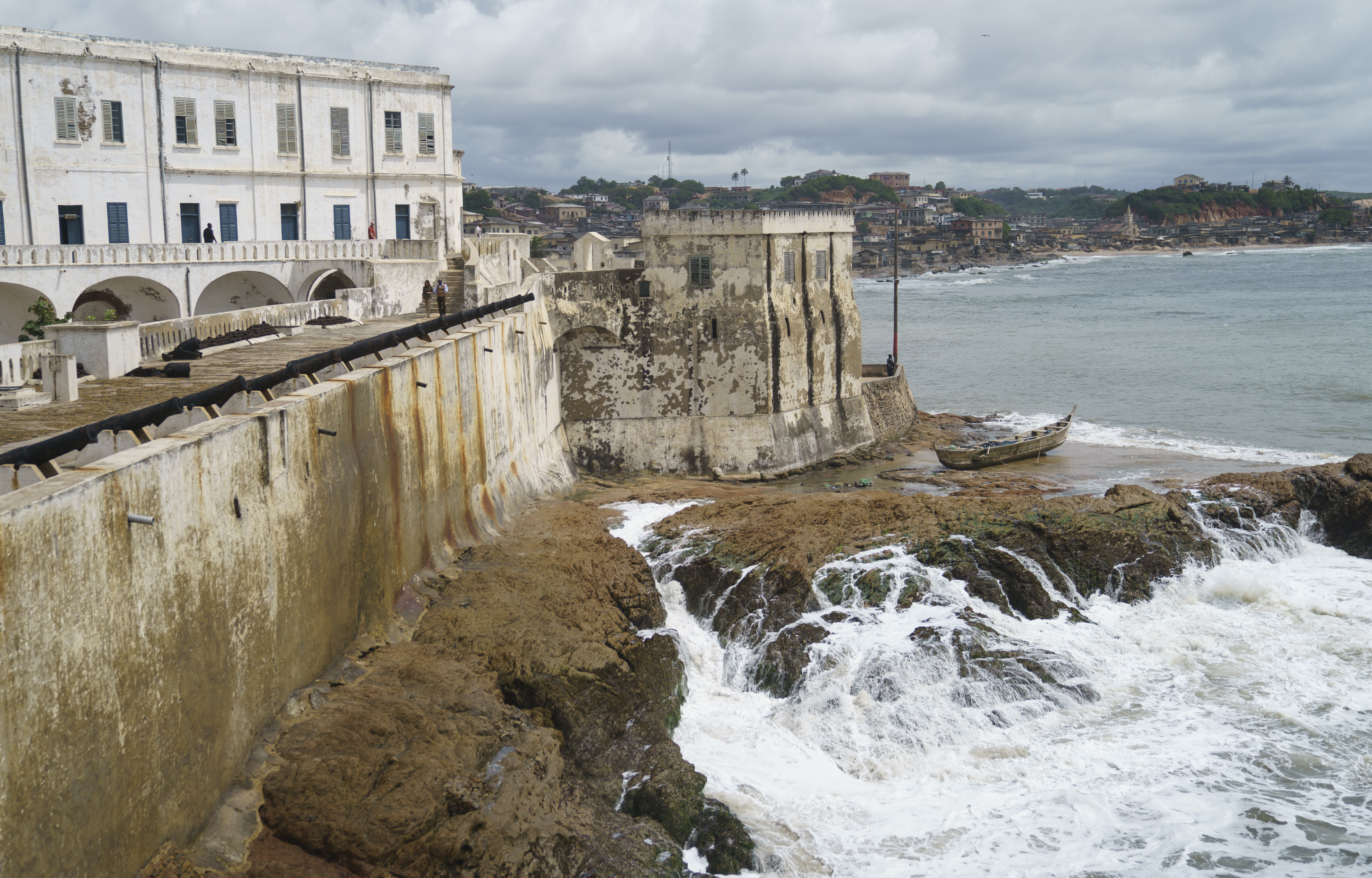 Cape Coast Castle on the Gulf of Guinea in Cape Coast, Ghana,

While this is not the first time Ghana is seeking to encourage a return, the rising popularity of ancestry DNA tests coinciding with police brutality and the reawakening of white nationalism have rekindled a desire with some African Americans to more about their roots now more than ever.

Kambon feels there are advantages to moving to Ghana, telling the story of a friend who had also moved to Ghana. “He said, ‘This is what it must feel like to be white in America”. You’re able to walk around freely, nobody is going to do something to you just because you are black because everybody around you is black. In the US, police come around you and your heart skips a beat, here, there is a level of freedom from fear that can’t be purchased.”

The official policy of welcoming returnees has been backed largely by local attitudes. While there is an awareness of the otherness of returnees, Kambon says many ordinary Ghanaians see him as one of them. His ability to speak a local language and his adherence to the Akan traditional spiritual system has particularly endeared him to local chiefs. Kambon (just like famous returnee Rita Marley) has even been enstooled in a chiefdom in eastern Ghana where he bears the title “ruler of the rearguard.” 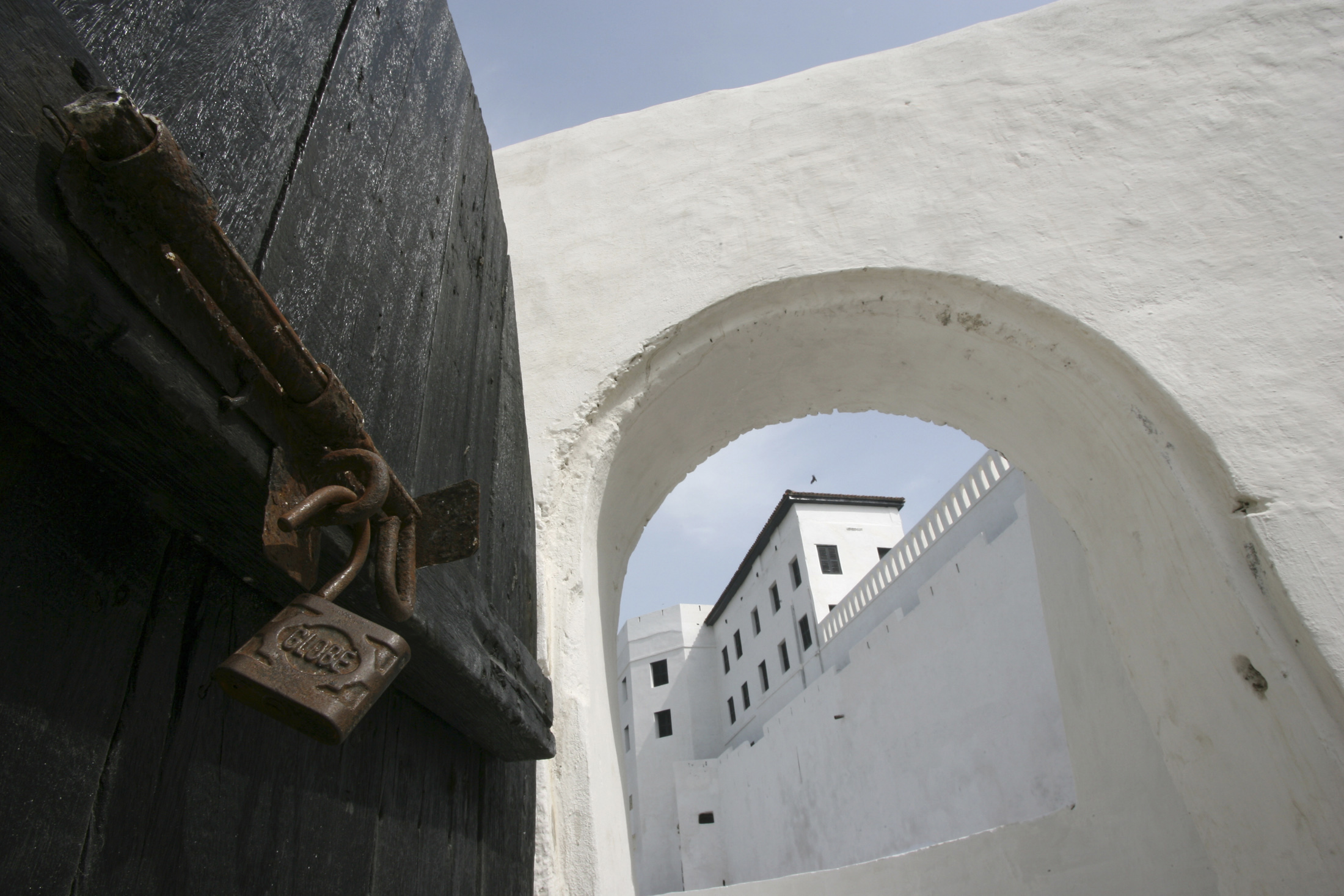 Elmina Castle in Cape Coast was used as a trading post for slaves in the 15th century.

Aside from sentimental reasons, the return of the African diaspora is economically pragmatic for Ghana. The tourism ministry is coordinating activities for The Year of Return along with private agencies and it hopes the pilgrimages will boost tourism in Ghana. Tourism could add $5 billion to Ghana’s economy by 2027, according to the World Travel and Tourism Council [pdf p.5] and this is a prospect the government is looking to explore. The government is also not losing sight of the investment potential and human capital of the highly educated “returnees” like Kambon, who decide to move permanently to Ghana.

For 21 years, he and his mother have been organizing return tours to give people a feel of life in Ghana. Kambon says he has received about 60 consultations on repatriation to Ghana in recent weeks, however he always advises using an Akan proverb that translates as “A person doesn’t use their two feet to measure the depth of the river” to encourage short visits before making the final decision to move.

No Voltarian in the game, NDC must think about it - Anita De-Soso loses