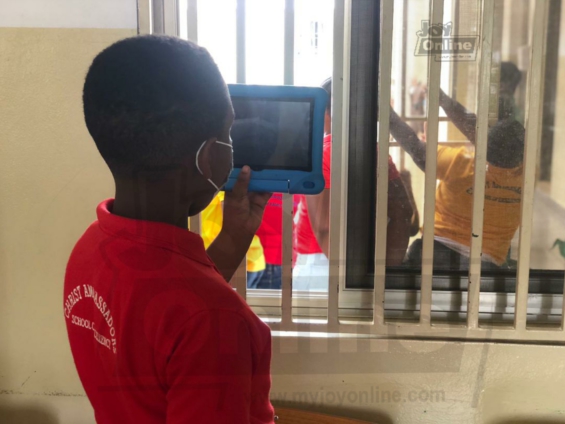 9-year-old Oswald gets the 'Our Day' he wished for

The 2020 Running mate of the opposition National Democratic Congress (NDC) flagbearer has joined the list of sponsors who have responded to the ‘Our Day’ petition of 9-year-old Oswald to his mother.

Prof Naana Jane Opoku-Agyemang in a tweet on Friday said, “I am immediately sending to him, the latest iPad Pro fully loaded with educational content just as he wishes.”

Describing the Class three pupil as an intelligent boy, the former Education Minister said she was thrilled and fascinated by the detailed nature of Oswald’s letter to his mother.

Oswald is such a fascinating & intelligent boy. I am absolutely thrilled by his story.

I am immediately sending to him the latest iPad Pro fully loaded with educational content just as he wishes.

Do have a memorable our day my gem. Will pay you & your class mates a visit soon. https://t.co/DPpGYw5Vaq

She further wished the 9-year-old a memorable day, promising that “[I] will pay you and your classmates a visit soon”.

In a letter dated July 29, 9-year-old Oswald petitioned his mother requesting his favourite foods and beverages to make his end of academic term a memorable one.

As fate will have it, the son-to-mother petition was posted on Twitter by @SmylyThe3rd, his mother’s friend. Consequently, what started as a mere petition to a mother has developed into a full-blown mobilisation point with many waiting patiently to see how it all unfolds at the Christ Ambassadors School of Excellence in Sakaman, Accra.

Our Day instructions that my colleague’s son gave to her. The emotional blackmail at the end 😂😂😂 pic.twitter.com/VrEuUeQYAW

The post has since gone viral with ‘Our Day’ garnering nearly 200,000 tweets alongside ‘Mrs Appiah’ believed to be the (favourite) teacher of the pupil also in Ghana’s Twitter trends.

Eventually, it triggered an uproar on social media, including reactions from a demography that nobody saw coming as far as the regular online banter is concerned.

First off, award-winning musician, KiDi has arrived in the School as pledged, to light up the celebration with a performance for the children.

From nutrition lines, beverage brands to educational and financial packages among others, top companies across the country have expressed keen interest to ensure that the ‘Our Day’ goes beyond a day’s event.