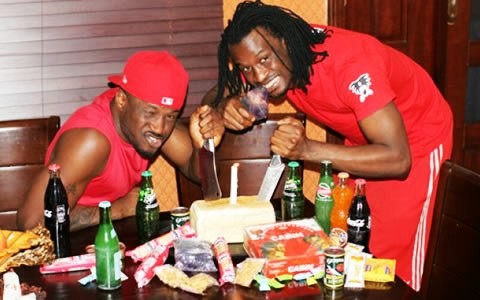 Nigerian music duo, P-Square stunned fans when they decided to hold an unusual 31st birthday party Sunday below the expectations of many.

The duo, made up of Peter and Paul Okoye, instead of the usual lavish birthday party opted to rather celebrate their big day with a loaf of Agege bread, a tin of Geisha sardine and Cabin biscuits.

As if that was not enough, the Chop My Money hit singers also had on their birthday table – which had no table spread – a bottle of Schweppes, Coke, N10 biscuits, a bottle of Limca, one sachet of water, a candle (which was stuck inside the bread).

The low key birthday party with its picture has sent social media circles buzzing, as many wonder what informed this wealthy duo to celebrate their big day with such a ‘poor party’.

A source close to them explained their success did not come cheap and they didn’t consider it appropriate to engage in profligacy in the name a birthday party.

The source said P-Square wanted to keep it simple and still have fun while pointing out to their fans that regardless of their personal economic situation they can actually have a birthday party as simple as theirs and still have fun.