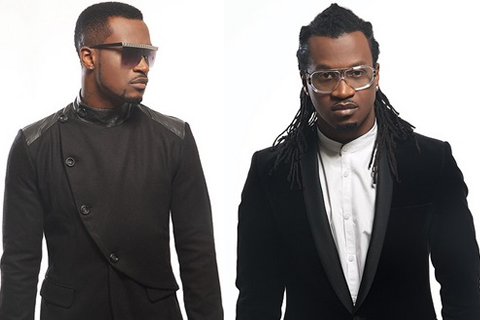 Peter Okoye of the P-Square fame has downplayed the possibility of the brothers staying together till retirement.

Speaking with Vibe Magazine, Peter said “30 children cannot continue to play together for 30 years. Being apart is the best solution at the moment.”

The singer, who has since gone solo, disclosed that their family feud has lingered on for four years.

He said, he has no problems with his other brothers and their wives and doesn’t know what exactly is wrong.

“Some individuals decided to separate two individuals by saying this person is better than this person but my motto is, if you steal from Peter to pay Paul, you’re paying P-Square. “Oh I hate this Peter.”

“Well if you see two of us on stage, with Peter on one side and Paul on the other side, you will watch the show like this. (He covers one side of his face with his phone). The reason why I started responding to social media is because there was something that came out one time.

“I was advised “Peter do not say anything” but it’s affecting me today. When my brother put out that he sings and writes all the songs. I never responded but right now, there are 50% of our fans and some groups that believe Peter doesn’t sing. All because I wanted peace. But now if you say anything about me, I will respond.

“My brother is my twin, fine, but you keep telling me blood is thicker than water. Obviously you think “Paul is my blood and my family is the water? You guys better be out of your minds. Being apart is the best solution at the moment. It’s not pride. It’s not ego. It’s respect. We’ve lost it.”

“Last year, nobody knew what was happening. ‘When are you guys releasing a song?’ They did not know we were fighting but we’d still go on stage and perform. All I wanted was to keep the family together but what the fans wanted was to have Psquare.

“We gave you guys Psquare even though the family had been fighting for about four years – even as of last year that we claimed we were back. I cannot even face the shame of making the fans feel that we are okay. We are not okay. It’s not healthy. I don’t have any problem with their own family.

“The wives, everybody. I am cool with them. I don’t know what’s wrong. I don’t know why it looks as if the hatred is on my family. I’ve tried to ask them what the problem is but nobody is telling me anything.”