Paris attacks: Many arrested in raids across France

A total of 23 people have been arrested and dozens of weapons seized in a series of raids on suspected Islamist militants across France, officials say.

The crackdown follows multiple attacks on bars, restaurants, a concert hall and a stadium in Paris on Friday, in which 129 people were killed.

Meanwhile the brother of two suspects, arrested in Belgium, has been freed.

Mohammed Abdeslam's lawyer said on Monday he had been released without charge, proving his innocence.

His brothers are Brahim Abdeslam, killed during the attacks, and Salah, who is on the run.

He is one of five out of seven people arrested in Belgium at the weekend who have been released.

France held a nationwide minute of silence at midday local time (11:00 GMT) for the victims. 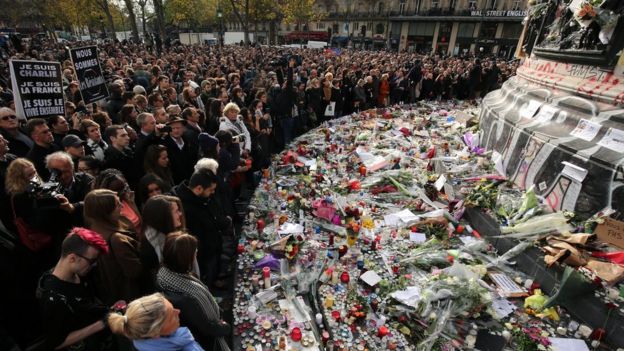 Thousands filled the Place de la Republique, in Paris, for the minute's silence

Two more Paris attackers were named, along with five already identified. One is confirmed to have entered Greece as a migrant earlier this year.

Investigators are also reported to be focusing on a Belgian of Moroccan descent who is described as the possible mastermind of the attacks.

Abdelhamid Abaoud, 27, lived in the Molenbeek neighbourhood of Brussels, as did two of the attackers, and is now believed to be based in Syria, where he has risen through the ranks of IS.

Police have named Brussels-born Salah Abdeslam, 26, as a key suspect, and a manhunt is under way. He was reportedly stopped by officers in the wake of the attacks while crossing into Belgium but then let go.

The BBC's Christian Fraser in Brussels says the Belgian authorities are confident that he is in the Brussels area.

Meanwhile, French aircraft have attacked Raqqa, the stronghold in Syria of the Islamic State group, which has said it carried out the attacks.

IS has issued a statement saying the raid targeted empty locations and that there were no casualties.

Mr Valls said France was dealing with a "terrorist army", rather than a single terrorist group.

"We know that operations were being prepared and are still being prepared, not only against France but other European countries too," he said.