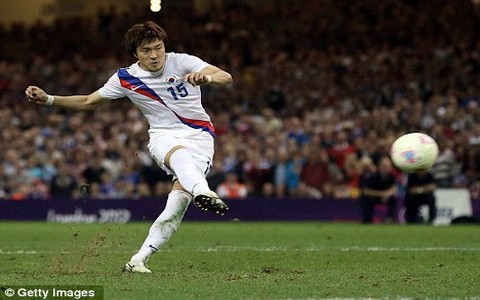 Park Ji-sung has called time on a trailblazing career that was launched in South Korea's unlikely run to the World Cup semifinals and really took off during his seven seasons with one of the world's biggest clubs.

The long-time Manchester United midfielder told a news conference Wednesday at a stadium named in his honor that he has retired from top-flight football. In his immediate plans are two friendly matches later this month and a wedding date in July.

The 33-year-old Park played his last season on loan with PSV Eindhoven in the Dutch league. He retired from international football in 2011, after representing South Korea at three World Cups, and rejected calls for a return to help the squad at Brazil 2014.

A high-energy, hard-working midfielder, Park followed manager Guus Hiddink from the national team to Eindhoven after the 2002 World Cup, then became the first South Korean to make an impact in the Premier League after signing with Manchester United, where he won the 2008 Champions League and four Premier League titles.

At the time of negotiations for his last contract at Manchester United in 2011, manager Alex Ferguson said the Korean's "career at United has been nothing but excellent, a tremendous professional."

Park left Old Trafford in 2012 after seven seasons to make an ill-fated move to Queens Park Rangers. After the team's relegation from the English Premier League, Park was loaned to PSV Eindhoven, where his European journey had begun in 2003.

"I've been mulling retirement since February, and I've concluded that my knee won't hold up for another season," the domestic Yonhap news agency quoted Park as saying. "I have no regrets about my career. I do think about what might have been if I hadn't been injured, but I have no feelings of disappointment or sorrow as I leave the sport."

Park had operations on his right knee in 2003 and in 2007. He was sidelined for eight months after the second surgery and had occasional trouble with the knee in recent seasons.

He told a gathering Wednesday that he'd accomplished more in football than he'd imagined possible.

He sent many benchmarks for Asian footballers, including being the first to score goals at three World Cups.

When his country co-hosted the World Cup with Japan in 2002, Park netted the winner in an upset 1-0 victory over Portugal in the last group match to get South Korea into the knockout stage for the first time. The South Koreans were the first from Asia to reach the World Cup semifinals.

In 2006, he scored the equalizer to hold eventual finalist France to a 1-1 draw and, in 2010, he scored in the 2-0 win over Greece that helped South Korea reach the Round of 16 for the first time on foreign soil.

Park and PSV Eindhoven are due to face two South Korean club teams in friendly matches later this month.