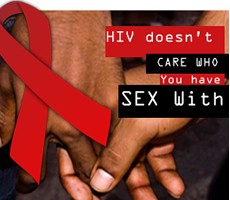 A clinical trial had shown benefits of antiretroviral (ARV) treatment before.

But this trial, reported in the Lancet, is the first “real-life” public health programme of its kind.

A UK HIV expert said there was a growing consensus that getting ARV drugs to as many people as need them would cut transmission rates.

To mark World Aids Day, the World Health Organization has issued a statement on global progress on cutting new infections and Aids-related deaths.

The WHO says improving access to ARV drugs is key to cutting rates further.

The drugs reduce the amount of virus in the blood, and cut the risk of an infected person passing HIV on.

Last year, at the UN General Assembly, governments agreed to set the goal of getting 15 million HIV-infected people worldwide on the life-saving antiretroviral medicines by 2015.

The WHO says this target could be within reach – provided countries can sustain current rates.

And it says about eight million people in low and middle-income countries are getting the treatment they need, up from just 0.4 million in 2003.

Dr Gottfried Hirnschall, director of the WHO’s HIV department, said: “The challenge now is to ensure that global progress is mirrored at all levels and in all places so that people, whoever they are and wherever they live, can obtain antiretroviral therapy when they need it.”

This year, the WHO issued new guidelines for treating people with HIV who have uninfected partners with antiretrovirals.

The research from China, which followed couples for up to nine years, was the first programme to really test this out in the real world.

In 24,000 couples, the HIV-infected partner had received treatment at the start of the study period – to test out the preventative benefits – while 14,800 had not.

This was because they had not met the national guidelines HIV positive people normally have to meet to receive treatment.

The researchers say this equates to a 26% reduction in the risk of HIV transmission. This is a lot lower than the 89% difference seen in the clinical trial.

And the authors say the protective effects of ARV therapy only appeared to last a year, with transmission rates becoming more similar between the treated and untreated couples in later years.

Keith Alcorn, of the HIV/Aids expert group NAM Aidsmap, said it was an interesting study.

“It shows the real-world impact of using ARV treatment in this way.

“The results are not as big a reduction in transmission as in the clinical trial, but there is still an effect.”

He said the difference could be explained by people not adhering to their drug regime as well as they did in the study, or stopping their treatment after experiencing side effects.

Mr Alcorn added: “There is a growing international consensus that treating everyone who needs it is going to have an impact on transmission.”