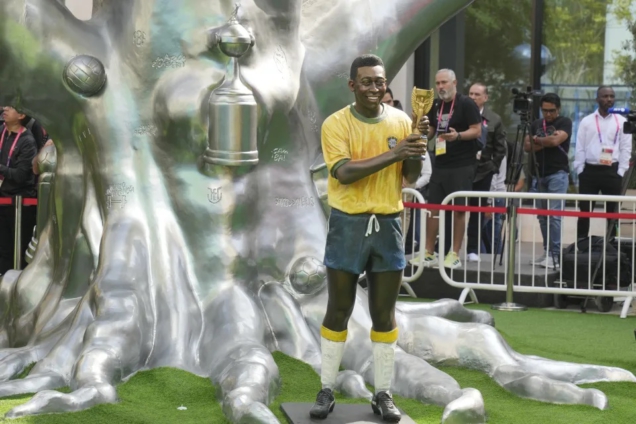 Brazil great Pele congratulated Lionel Messi and Argentina for winning the World Cup and Kylian Mbappe for his goal-scoring exploits in Sunday’s final.

Pele, who won a record three World Cups as a player, has been in the hospital to treat a respiratory infection.

He posted his message on Instagram after Argentina beat defending champion France 4-2 in a penalty shootout following a 3-3 draw at Lusail Stadium in Qatar.

”Today, football continues to tell its story, as always, in an enthralling way,” Pele wrote in his post. ”Messi winning his first World Cup, as his trajectory deserved. My dear friend, Mbappe, scoring four goals in a final. What a gift it was to watch this spectacle to the future of our sport.”

Messi scored two goals in the match and finally won the lone trophy that had eluded him in his remarkable career. Mbappe, who scored in the 2018 title match when he was a teenager just as Pele did in 1958, became only the second player in history to score a hat trick in the World Cup final.

Both Messi and Mbappe also scored in the penalty shootout.

Pele also took time to mention Morocco for its history-making run as the first African team to reach the semifinals at the tournament.

”And I couldn’t fail to congratulate Morocco for the incredible campaign,” Pele wrote. ”It’s great to see Africa shine.”

Pele ended his message by again lauding Argentina and mentioning the man most often associated with him as the greatest players the game has ever seen – Diego Maradona.

DISCLAIMER: The Views, Comments, Opinions, Contributions and Statements made by Readers and Contributors on this platform do not necessarily represent the views or policy of Multimedia Group Limited.
Tags:
2022 World Cup
Kylian Mbappe
Lionel Messi
Pele