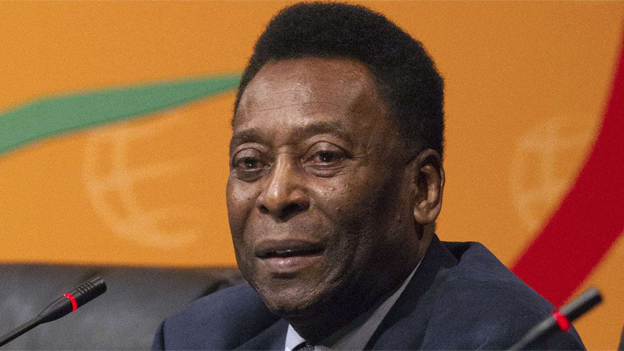 Pele has joked that he is ready to play for Brazil after being released from hospital in Sao Paulo.

The 74-year-old admitted he had a "scare" after spending several days in intensive care.

After successful treatment for a urinary tract infection, the three-time World Cup-winner talked about helping his country to Olympic football gold in Rio in 2016.

He said: "I'm well and recovered, and now I am preparing for the Olympics."

Pele has only one kidney, having had one removed towards the end of his playing career.

He was admitted to Sao Paulo's Albert Einstein Hospital on 24 November after being diagnosed with a urinary tract infection that stemmed from surgery to remove kidney stones 11 days earlier.

The former Santos and New York Cosmos striker will continue recovering at home.

Pele at his news conference in Sao Paulo

He told a news conference: "I'd like to thank the doctors that took care of me. It was a real fight.

"I would like to thank God – and all friends that have sent me messages and were worried about me.

"It was something I was not expecting, but I was not afraid to die.

"I've had messages from China, Pakistan, from almost all the European countries.

"It is gratifying and good to know that I had the support of so many people around the world who were hoping the situation improved."

Pele continued with a joke, adding: "Now I am preparing for the Olympics. Three professionals can play in the Olympics and I'm one of the three!"