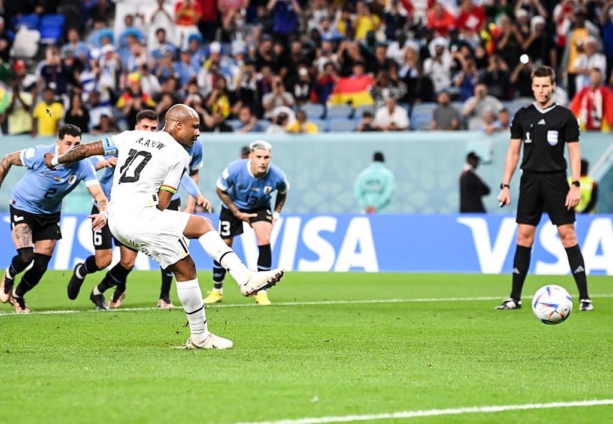 Ghanaians on social media have expressed disappointment with the penalty missed by the captain of Ghana’s senior national team, Andre Dede Ayew.

Black Stars in their last group-stage match against Uruguay was awarded a penalty in the first half of the game.

However, this penalty was sorely missed by Andre Ayew.

In light of this, Ghanaians have taken to social media to express their disappointment in regards to the penalty miss.

Asamoah Gyan can finally rest… Ghanaians will finally move on to Dede Ayew.

Handling over ceremony 😅😂penalty mp3 DEDE😂DEDE is going to reign for over 10years 😅😂 Asamoah can now rest in peace ✌🏾 pic.twitter.com/jY0Xam7UHC

So Dede Ayew will be seeing the faces of over 35 million Ghanaians in his dream every night😂? Aboozigi🤣

Dede Ayew has also wasted a crucial penalty in 2022 against Uruguay.#Andydotcom pic.twitter.com/QT4fHLfM0K

They insulted and cursed Asamoah Gyan because he missed a penalty against Uruguay.

What will Ghanaians do to Dede Ayew? pic.twitter.com/rsuQMzJqW3

Finally asamoah Gyan can rest. Someone has taken over and suarez is still a happy man.

It’s time for Dede Ayew and Jordan Ayew to leave the Black Stars for good. Thanks for their service. pic.twitter.com/HWns087o0N

No better person to score for Ghana 🇬🇭 at a World Cup in Qatar than Dede Ayew who plays for Al Sadd in Doha.

Sulley Muntari got up and was congratulated by Yaya Toure, Khalilou Fadiga, Geremi Njitap and Didier Drogba. African Brotherhood. 🫶🏾🖤 pic.twitter.com/40RMzxKuIU

Dede Ayew should score to clean this mess else NPP people will say he’s the reason for the economic hardship in Ghana 🇬🇭 🤷 pic.twitter.com/GO1BOIik0A

Dede Ayew i beg do some magic. I still dey believe in you. Shame my enemies for me na beg i dey take God beg you pic.twitter.com/bE83xEwV4A

Asamoah Gyan should have been the one to play the penalty not Dede Ayew. He would have done everything to redeem his name

If Dede Ayew had scored that would have killed the confidence of Uruguay 🇺🇾, now looks a tall order for Ghana 🇬🇭 to come back

DISCLAIMER: The Views, Comments, Opinions, Contributions and Statements made by Readers and Contributors on this platform do not necessarily represent the views or policy of Multimedia Group Limited.
Tags:
Andre Ayew
Black Stars
Uruguay